Afternoon Tea with my Mum

The 9th of April was the fourteenth anniversary of my dad's death. Lee was asked to go and play a festival in Ipswich, and he wanted me to go with him, but I didn't want to be at a gig on the anniversary. However, I didn't mind if he went, so he went at about 8.30 and I stayed in bed for a while reading, with both cats asleep on me. I had planned to go out with my mum. She had a gift voucher for afternoon tea at Blacker Hall Farm which is near where she lives. It was a retirement present and she very kindly said she would take me. So I had a shower, got ready, and headed off to hers to pick her up.

On the way in we saw a lovely pot with flowers in so we bought it to take to my dad's grave later. The cafe is through the shop and is always full, we were glad we had booked. They do a vegetarian afternoon tea so I ordered that and a latte. My mum wanted some modifications to the sandwiches (eg she didn't want horseradish on the beef sandwich) and staff were quick to do that for her.

It was lovely! I got two cheese and tomato sandwiches and two falafel and beetroot relish sandwiches, both of which were lovely! Then there was a huge scone with lots of clotted cream and strawberry jam. Then there was a piece of fruit cake (with cheese, as is right and correct in Yorkshire), a raspberry meringue, a lemon posset, and for me a salted caramel brownie. My mum's had chocolate torte but we gussed that had gelatine in it so wasn't okay for vegetarians.

We both ate our scones and the raspberry meringues as we didn't think that would have travelled home very well, but we took home everything else. As we were leaving we spotted the mum and grandma of my friend Stacey, so we stopped to speak to them.

We went to the cemetery and put the pot on. It's not somewhere I go a lot but I was happy to go with my mum. It started hailing so we didn't stay long! We went back to my mum's house and I stayed there til about 11pm! We had a few jobs to do so we did them, and she made me veggie sausage rolls and beans for tea. There was one left over so I added it to my cake box to bring home. I managed to stick the pages for a zine while I was there which was a job well done.

I could have stayed over but I didn't want to leave the cats all night. I got back and fed them and then stayed up way too late reading! It was cold in the house by then so I ended up sleeping under two duvets to be cosy. On Sunday I took it easy; I fed the cats late and was thinking about some lunch when Lee arrived home which was nice. He'd had a great time at the gig which was good.

I was wearing the Joe Brown's vintage looking tea dress I wore a couple of weeks previously, but didnt' get a photo. I had remember to put contact lenses in for the first time in forever, so I put some make up on too! It was nice to spend the day with my mum and then my stepdad too. 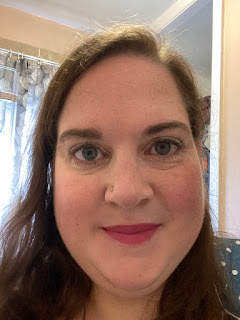 All ready in the bathroom before I went out 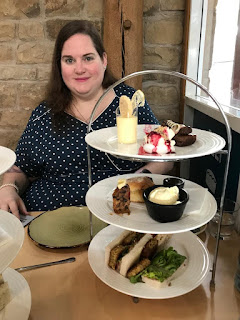 In the cafe with my mum 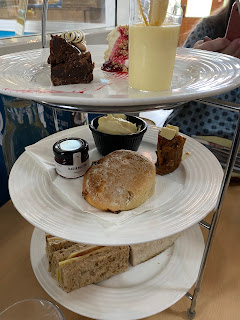 Lovely afternoon tea, I'd recommend it if you're in the area but do book!
Posted by Rebecca at Monday, May 30, 2022