SIX In Leeds and Vietnamese Food

At the end of March I went to see SIX in Leeds with Sam and Jodie. I've seen it once before, in January 2020, and loved it, so I was looking forward to seeing it again. I listen to the soundtrack a lot too.

First of all though I had a trustee meeting for the charity for which I'm a trustee, which was also in Leeds. It's only my second in person meeting so it was really nice to be able to go. We had lunch first, which was really good - they hire a company who are really good at veggie and vegan options, which I like. I also had to have my photo taken for the website! It was slightly surreal I have to say.

I left at 4 and drove into Leeds itself to park. I walked up through the Grand Arcade to the Grand Theatre and met Sam and Jodie. We had seats riiiiight in the top balcony which was slightly terrifying but there was a post for me to cling on to which helped!

If you haven't seen the show it's really fun and I would recommend it. It's about the six wives of Henry VIII and basically they're all trying to convince you that they had the worst time with him. The lyrics are so funny, the actors are all so talented, the choreography and the costumes are just so good. It's a lot of fun and I'm glad I got to see it again. It lasts just over an hour, so by 6.30 we were out of the theatre.

Sam had booked a table at Nam Song Cafe just across the road for us, so we headed over there. I love Vietnamese food but hadn't yet been here, so I was keen to try it. The food was excellent but the service was slow - they said they were having staffing problems. I went for summer rolls and a vegetable curry, both of which were delicious and filling. I would go back, it was good food!

I got home just after 8pm and Facetimed my mum who was in France visiting my godparents, so it was nice to speak to them all. Then I went and got into bed cos I was knackered! 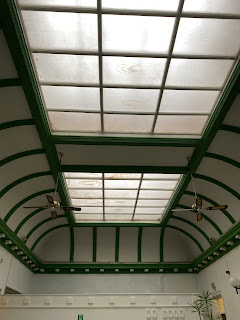 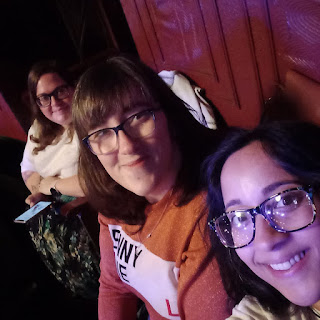 Sam took this of all of us, at this point I was sitting on the steps 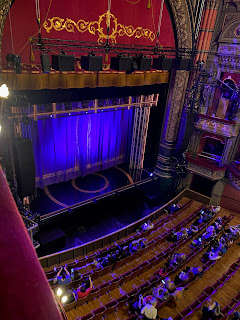 The stage just as people started piling in 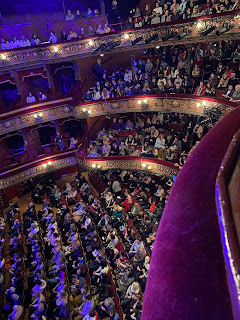 Look how high up we were! Slightly terrifying! 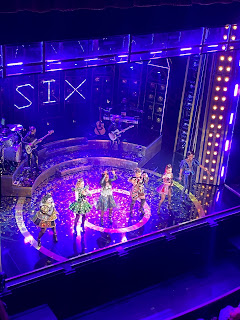 For the very end song you're encouraged to take video and photos, so I did! 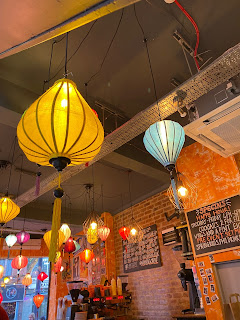 Lanterns on the ceiling in the cafe 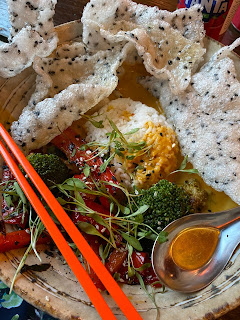 Tofu and vegetable curry, with rice and cracker type stuff 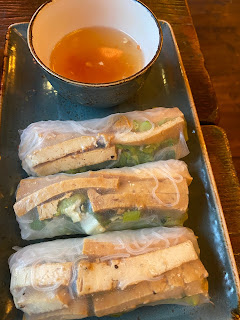