Out with Friends and What I Wore April 1st

I had plans to see my friend Katie on the 1st of April, and then I also invited my friend Stacey to come too. They don't know each other, but they have friends in common and I thought they'd get on. And they did! It was nice.
Our bathroom got refurbished during the day. We had bought new fixtures and fittings, but were keeping the same bath, toilet, and sink. We bought taps, a new shower, a new shower screen and bath panel, and some other bits. The bath and sink needed resealing as they'd been leaking. Lee had managed to secure the underneath but we hired a plumber to do everything else. He arrived early meaning I couldn't have a shower beforehand, and we weren't allowed to use the bath or shower for a while, so I headed to my mum's for a bath. She was on holiday in France, so I let myself in. As I knew I was having a bath I had taken one of the bath bombs that my cousin bought me for Christmas. It was lovely! Pink and yellow and glittery, and it smelt lovely. I wallowed for a bit then washed my hair in the shower and got dressed and ready.
We had booked a table at Smokehouse in Wakefield city centre. I was surprised by how many vegetarian choices they had even though they're a meat smokehouse, so I was happy to go. Stacey arrived not long after me and Katie wasn't long after that. We ordered food, which did come quickly. I had nachos with cheese, guacamole, and salsa, and then the pulled jackfruit barbecue burger. I wouldnt' make jackfruit myself at home, so I was happy to have it in a restaurant. It was yummy.
However, the service was really slow which annoyed me. They could have easily sold us puddings or another round of drinks (I actually only had water as I wasn't asked if I wanted another drink) but didn't bother to bring over the menus. It felt like the staff didn't really care if we were there or not, which did really annoy me. But, we had fun sitting and chatting, which was the main thing.
I got home just before 10pm. I was wearing a new mustard dress from Simply Be which was in the wardrobe still with its tags on, so I thought it would be ideal. I love it, it's floaty and cool so will be perfect in the summer. As it was cold, I put my Simply Be denim jacket on too - I love this for just chucking on over an outfit for some warmth. It fits me so well. I was also wearing my black footless Snag Tights, which is something I've been doing a lot recently. And my patent dolly shoes from Schuh which I bought with some Christmas money. I love the outfit as a whole! 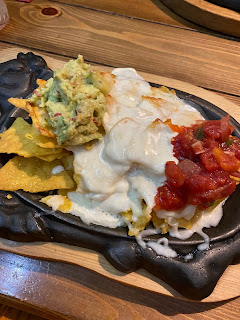 Gorgeous nachos, I could eat them again right now! 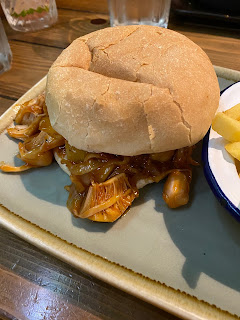 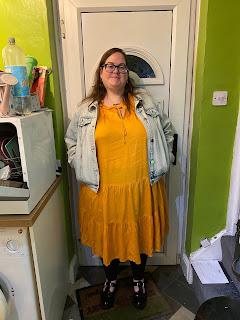