What I Wore 27th March

27th March was Mother's Day, but my own mother was in France so I had said we would go out with my aunt and grandma. We booked a table at the Sovereign pub in Shepley, which is a pub I like. It's part of a chain but I like the atmosphere inside it. They had a set menu for Mother's Day but it had veggie options so it was fine. Caroline managed to get lost on the way there but she got there eventually, and fortunately staff weren't angry at us. I had mushrooms to start with and then the veggie roast which I've had before, it's nice enough and comes with plenty of vegetables and gravy. I didn't have a pudding, but I did have a nice gin cocktail with raspberry and ginger beer
I opened the wardrobe to find a dress to wear, and lit upon this one, which is new. It still had the tags on, so I definitely haven't worn it. I can't remember how long it's been there, oops. It's a Joe Brown's dress and it's supposed to look quite vintage, which it does. I love the colour and the polka dots! Lee really liked it too (I don't base what I wear on what he likes, but it's nice to get the compliment!). I wore it with my black footless tights and white Converse as previously as the weather was just so nice! 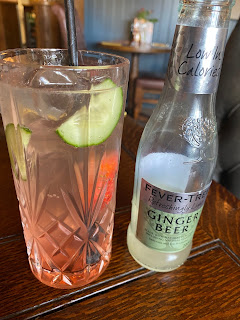 I'd drink this again 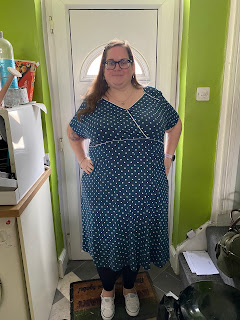