Lunch Out with my Friend and What I Wore 16th March

On the 16th of March I went to meet up with my friend Michelle for lunch. She has recently moved back to Yorkshire after living in London for a few years, so it's been nice to see her more. I suggested that we go to Jem's Pit Stop in Birstall. I drove past it a few months ago and have been meaning to go ever since. It's a part of the world Michelle knows well as she's from there. My satnav insisted it was in Batley but no, it's become Birstall by that point, I'm pretty sure! I arrived just before noon and ordered a coke float while I was waiting for Michelle.

The whole place is covered in stuff - bikes, hub caps, music memorabilia, all of that kind of stuff. There are two VW vans you can sit inside to eat, and several booths on the back wall. I love how kitsch it is - I know it's a gimmick but if you lean into it I think that's fine! The menu had several vegetarian and vegan choices. All the hotdogs could be made vegan so I went for the Verstappen one, which came with chilli cheese sauce and jalapenos. Michelle ordered a cheeseburger and I think she enjoyed it!

We had some really deep chats while we were sitting there, it was really lovely. Michelle and I have known each other since sixth form college and we used to have deep chats then, so it's nice to know that twenty years later we can still talk about deep and meaningful things!

I wore my Clash t-shirt and my Scarlett & Jo netted skirt, because I felt this would fit in well with the diner aesthetic, haha. I got changed into my pyjamas when I got home, but then I went out later because it was book club in person, so I chucked the same things back on. It was a busy day but a nice one! 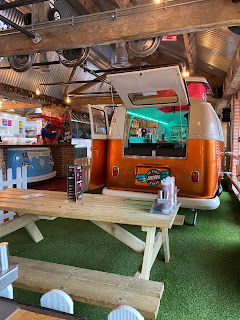 One of the VW vans - they were both in use when I arrived or I might have asked to sit in one! 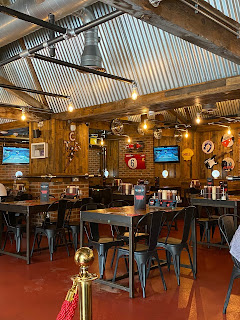 It's a cute place - it sells bikes and stuff, and even has a tattoo parlour in the basement! 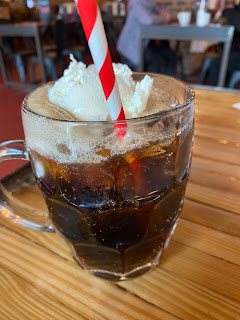 Coke float - I can't remember the last time I had one! 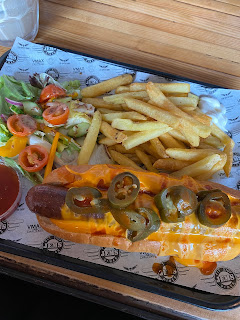 Vegan hotdog with cheese sauce and jalapenos, it was really nice! 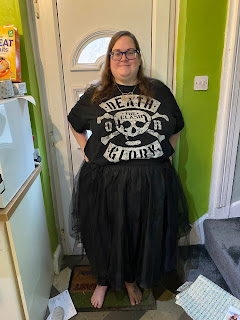 And here I am in my Clash t-shirt and netted skirt, I love the skirt so much!
Posted by Rebecca at Tuesday, May 03, 2022