Lunch out for Philippa's Birthday

On the fifteenth of May Lee and I headed to Sheffield to have lunch with Philippa and some friends for her birthday. She had invited us a couple of weeks before alongside Claire, Sandra, their son, and her friend Cat and her children, who I have met before but not for literally about eight years (the babies were tiny at the time!). She wanted to go to Temple of Fun which is in a really fun old factory type building and which serves amazing vegan food. Philippa and I went not so long back and I really enjoyed the food then, so I was keen to go back. Lee's never been, and I promised him it was nice!
We all got there and chatted for a bit. I took Philippa some flowers because I always like to be bought flowers. I had ordered them from the flower shop in our village and just said "Colourful" because Philippa is a very colourful person and the flowers were gorgeous - oranges and yellows which was so cheerful! I should have taken a photo.
I decided on the Gouda God burger, which had melted vegan gouda and not meat bacon rashers. It was absolutely gorgeous, I would definitely eat it again. Lee had the fairground hotdog that I had had previously and liked it. And we shared some onion rings, which were huge and delicious.
On Sundays they do two Sunday roasts as specials, so a few people went for that. It did look nice, Lee and I will have to go again! The desserts are all sundaes and they were all absolutely immense. Lee and I shared the chocolate orange one which was gorgeous. It had chocolate ice cream and gorgeous orangey bits on top. I would like to try the unicorn one though! Philippa got a piece of brownie with a candle in because it was her birthday, which was nice.
I wore my rainbow dress and my Fuck the Tories necklace because I knew Philippa would appreciate both! I don't wear my rainbow dress very often because I feel like it needs a particular occasion to do it! But it is nice to wear. I also had my black footless Snag Tights on. 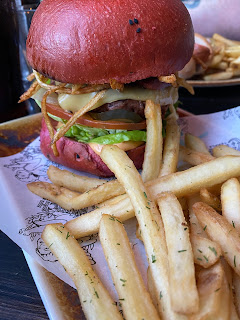 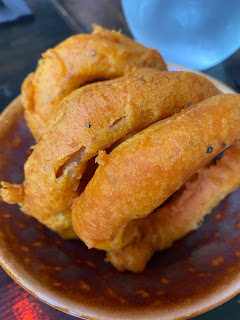 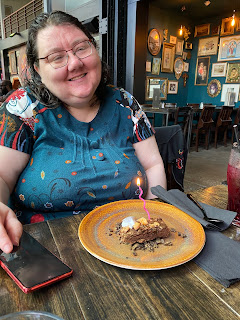 Pippa and her brownie 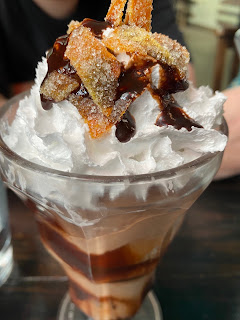 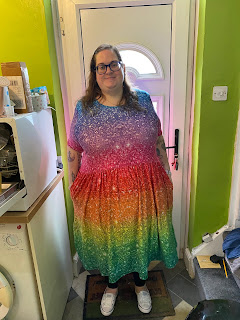 My rainbow dress and white Converse
Posted by Rebecca at Thursday, July 07, 2022