Towards the end of May I went to York to see my friend Jac and to visit a vegan Chinese restaurant that I'd heard amazing things about. I haven't seen Jac since my birthday in January so it was well overdue! I drove up at 4pm as I didn't want to hit traffic, and managed to park really easily just across from the restaurant. Jacqui finished work at 5pm so we met then and went for a drink in an old church that's been turned into a bar, which was very sticky but pretty cool and it had an extensive cocktail menu. I had a rhubarb bramble which was marvellous.

We went across to The Orchid at 6pm. I've heard rave reviews from vegan friends so wanted to try it. We ordered vegan crackers to start with, then Jac had mini spring rolls while I went for vegetable gyoza. Then she had broccoli and ginger with noodles, and I had "prawn" sweet and sour with rice. Then we both had chocolate fudge cake with vegan cream.

The food was nice enough but not amazing. I struggle to find vegetarian Chinese stuff around here from takeaways so I was really excited, but I didn't find the food THAT special. My "prawns" were nice, but there weren't really enough of them in the serving I didn't think. I did like my gyoza, which were steamed. It's mostly Chinese food but they do some Japanese and other Asian dishes too. The place was certainly busy enough and I'm sure that if you are vegan (I'm just vegetarian) you would appreciate knowing that it's a totally vegan kitchen. But I've had better food. It is cheap though! Three courses and drinks for both of us came to just over £50, which is good.

I took Jacqui home and stayed an hour or so there just chatting before driving home. It was so nice to see her! 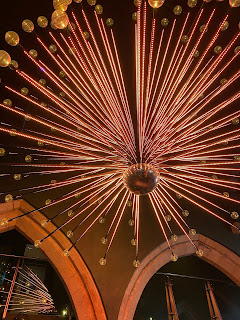 On the ceiling in the old church/bar 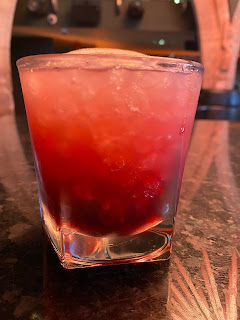 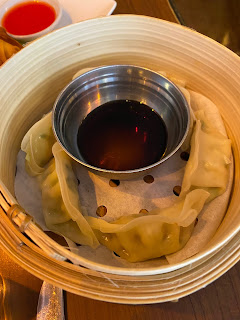 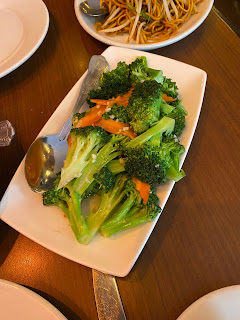 Jacqui's broccoli and ginger, which was nice 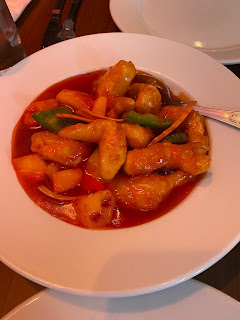 My king "prawns" in sweet and sour sauce 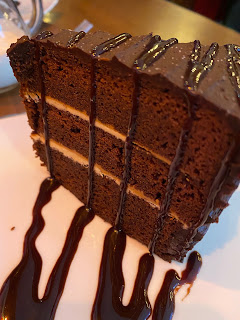 Chocolate fudge cake - it was lovely!
Posted by Rebecca at Monday, July 18, 2022