New Tattoos for Lee and me

Lee and I both went to The Ink Station in Heckmondwike for new tattoos in early May. We had had the appointments booked for absolutely forever so I'm glad it finally arrived. I went over first as Lee was working. I had seen some of the lacy/henna type tattoos that Nini does and I asked her to design one for me, which she did. She started tattooing that, doing the heart first. Then she did the black pattern which goes all around my arm. I had to bend my arm right back which meant my shoulder hurt for a bit afterwards!

Lee turned up about twelve. His tattoo was Vault Boy from the Fall Out games but dressed as a punk. His friend Zoe had designed it for him. Nini did a couple of tweaks and did the colours. I think it looks fab! It was a bit bloodied in this photo which isn't surprising as it was a lot of ink altogether! He's happy with it

While I was there I booked a tattoo with Kim in November. I've been wanting to have something by her for a while as she's really talented, so I'm really happy I could book something. I'm going to have a Hello Kitty I think, but I've got a while to think about it! I also need to get my foot tattoo retouched - it had a whole rainbow in it but it turns out I'm allergic to a lot of red and purple inks, so those colours have totally dropped out of it. Nini was shocked at how much has gone! But my foot hurt so much I will have to psyche myself up to get it tattooed again!

I think this is the 20th tattoo for me now, I will have to count them. 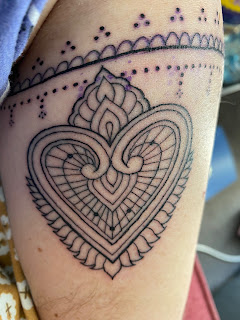 The carbon never comes off my skin at first, and obviously I didn't want to rub too much 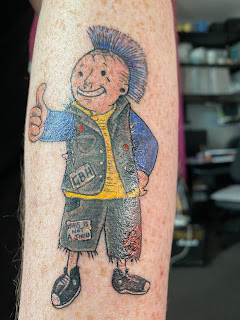 Lee's! They're both on a similar place on our forearms
Posted by Rebecca at Monday, July 04, 2022

Email ThisBlogThis!Share to TwitterShare to FacebookShare to Pinterest
Labels: tattoos