Tea Out with Sarah

At the beginning of May I had plans to see my friend Sarah in Sheffield. I hadn't seen her for ages because we'd both been ill and her whole household had had Covid, so we had had a few cancelled plans. But we managed to get together for tea. As I'd been at the snooker for the whole day previously, I knew I would be achy and tired, so Sarah suggested meeting at Wagamama at Centertainment because it's easily accessible. Perfect!
I had had my hair cut earlier in the day - it needed a good cut so I had about three inches taken off the length. I pulled on my heart print Simply Be dress which I generally wear with bright blue tights, but as I wasn't feeling 100% I decided to put leggings on instead as they're comfy and cosy. Sometimes I need that!
I got to Sheffield in good time as there didn't seem to any traffic. I went into Wagamama and asked for a certain seat (thanks disability) and then some water very quickly as I needed to take some painkillers (thanks ongoing womb issues). The greeter accomadated me wonderfully, with a smile, telling me it was no problem. I like it when staff are like that! I appreciate it!
Sarah arrived not too long after and we chatted the whole time. I love seeing Robyn too obviously but it was nice to see her just by herself, and Robyn was fine at home with her dad. We ordered mushroom bao buns to share, then I went for the vegan sticky "ribs" which are new, and the tofy raisukaree, which I usually get because it's just so nice and I like it a lot. Sarah went for pork gyoza and duck donburi, I think.
We then decided to get desserts too. I went for banana katsu which came with ice cream and caramel sauce. It was quite bizarre, as it was obviously deep fried, but the ice cream did make it like a dessert and I quite enjoyed it. Sarah had the smoked chocolate cheesecake and enjoyed that. We said goodbye eventually, and when I got home I got into bed to watch Schitt's Creek while Lee went in the bath - I needed a good rest and an early night! 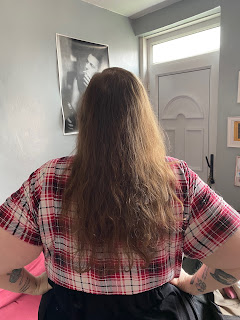 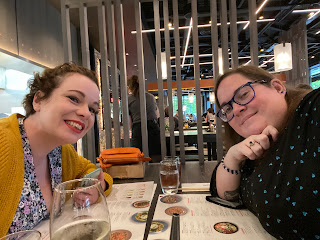 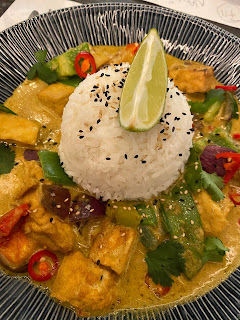 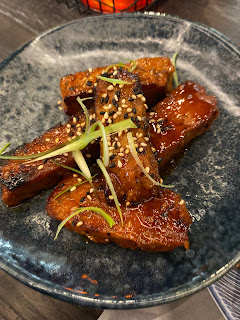 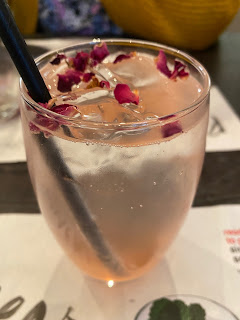 Cherry blossom lemonade which was really nice and refreshing 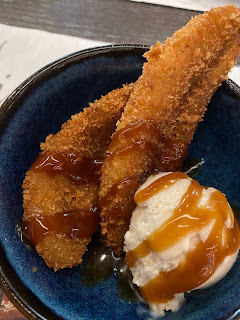 Banana katsu - I would eat it again 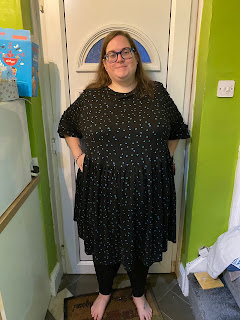 And me in my heart print Simple Be dress!
Posted by Rebecca at Friday, July 01, 2022