Northern YA Lit Fest In Preston in May

It's back! We're back! Back in person at a conference! I was so excited to go!

I went to Northern YA Lit Fest in 2018 and 2019 and had tickets for 2020 when it had to be cancelled due to the pandemic, so I'm a big supporter of the festival and was so excited to be back. It actually took place over two days, with the second day focussing on middle grade and children's books and authors. However, I know I wouldn't be able to cope with this, so I opted to just go on the YA day. I asked Lee to come with me to carry books and generally be helpful, but actually as the festival was less well attended than previously, I probably would have been fine by myself. But no worries, he enjoyed himself.

We set off around 8.10 and managed to get to Preston by just after 9.30, meaning we had plenty of time to get checked in and walk round the stalls. There were some good stalls, but I'd have liked a couple more I think. There was also some confusion as to which events were being held where, which could have been avoided by signs or by it being printed in the programme. I had signed up to the two panels featuring agents, as I'm trying to get agented myself, so I headed there. Lee didn't think they sounded too interesting, so he got himself a hot chocolate and sat in the break out areas playing on his Switch.

I first of all watched "The Publishing Process" which was engaging and interesting, and then watched "Getting Your Pitch Right" which veered off subject slightly but was still fun to watch. There was a lot of talk about Heartstopper and how it has hopefully shown that YA is very sellable, which I liked.

By this time it was 12 and there were some signings. I had taken some books that I've already read for signing, and bought a bunch more from the stalls. I spoke to Cynthia Murphy and she signed my journal as I read her book but it was from the library so I didn't have it for signing. The signings were a lot better this year, but again that's maybe because there were fewer people there. Queues weren't stupidly long and moved quickly. I was impressed!

There's a canteen right off the room where the stalls are, so we went in there for lunch. It was cheap and seats were plentiful so that was good. Before long it was 1pm and it was time to watch "The World We Live In" which included Simon James Green who was very funny and who also talked about having a school visit to a Catholic boys school cancelled recently, which was sad. It was good. Then came Living, Loving and Laughing which was very good, we both enjoyed that one. Two of the authors managed to sell themselves to me so Lee hotfooted it back to Ebb and Flo book stall to buy their books for me for the signings which were next. I also got copies for my friend Sam for her birthday, and both authors put a birthday message to her in the books which was lovely of them.

It wasn't obvious who everyone was at the signing tables and obviously, as there were different panels/workshops going on, you may not have seen everyone in the room. Signs on tables could have helped here. As it was I had to google C G Moore to check what he looked like before taking over my copies of his books for signing.

The last panel at 4pm was one about fantasy, and I found it interesting even though fantasy is not really my genre. Accessibility and accessible seats were a lot better this year, which I'm glad about. At 5pm I took a last look at all the stalls. There were far fewer proof copies this year which is a shame but not really something to worry about. I had bought many books! I had a really good time.

I had done some research beforehand into good vegetarian food in the area and found RK Dining which is Indian street food that is all vegetarian or vegan. This was extremely exciting to me! It was just down the road from UCLan where the festival had been held, and we got a table easily. The problem was there was too much choice! I went for samosa chaat to start with then masala paneer which came with three rotis so I didn't get rice. I also had a mango lassi. Lee went for a mixed starter (where he let me try everything) and Bombay potatoes, which also came to roti. That cost us the grand total of £25 which was a bargain!

There's a deli attached to the restaurant so we bought some stuff there to have for tea later in the week which is a treat too! I would recommend the place if you're in the area, it's quick, authentic, and delicious!

My dress, if you're wondering, is the Mary Poppins dress from Carolina Dress Room. I have worn it before but not for ages, and I thought it would be cute for a literary festival. I got a lot of compliments on it.

I can't wait until next year! 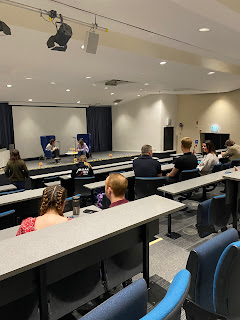 In the agent events are the beginning of the day 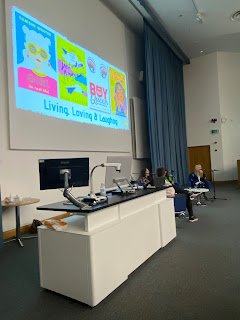 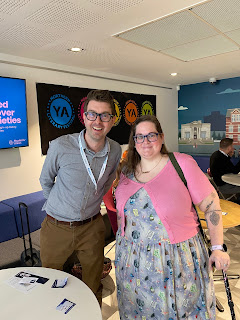 Me and Simon James Green! 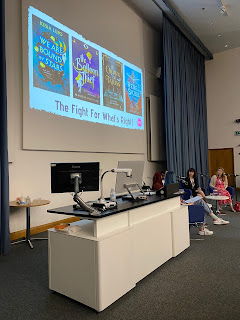 The Fight For What's Right 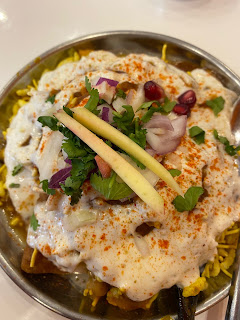 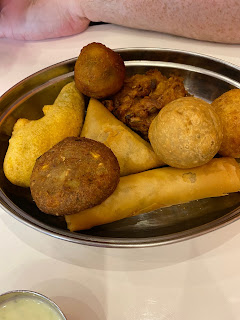 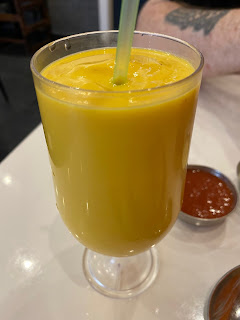 Mango lassi, it was so good! 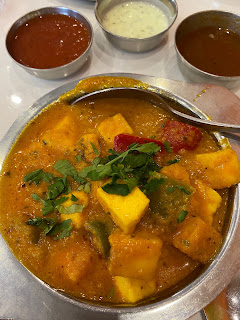 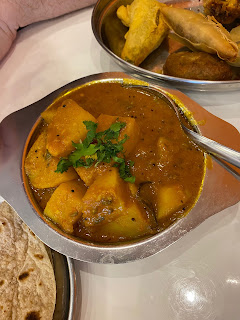 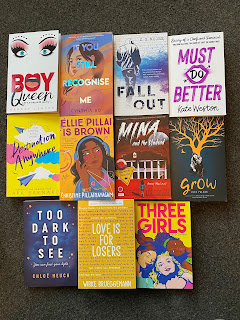 As I said I did take a few books to get signed that I already owned, which aren't pictured, but there are all the books I bought (most of them are now signed). The middle one at the bottom is a proof I was given!
Posted by Rebecca at Thursday, July 14, 2022