Holiday to France - meal out

On Tuesday evening of our holidays we went out to eat. The gite owners recommended Hotel de France in St Pardoux la Riviere, which was the village where we went to the boulangerie, too. They booked us a table so we rocked up at half past seven. The restaurant was pretty empty, which isn't unusual in France because they tend to eat later. The waiter was a really nice English man who had lived in France for fifteen years apparently.

The menu was pretty small, but there were some interesting options. We could choose a starter, a main, and a dessert for 33 euros, so we all went for that. We had been warned that the starters were huge - yes, they absolutely were. They were amazing, though. In fact everything was. It was all stunningly plated and wouldn't have looked out of place in Masterchef! I would definitely recommend it if you ever find yourself in that part of the world.

I wanted some Cotes du Rhone wine, which is my favourite, but they didn't have any bottles left, so the waiter suggested this one instead and it was beautiful - a really worthy addition to my steak. The whole meal was just so good - I could eat it again right now! 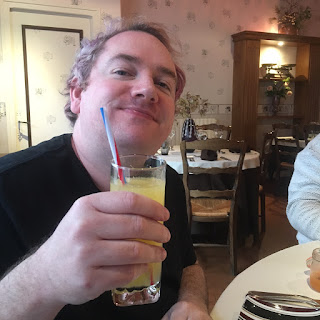 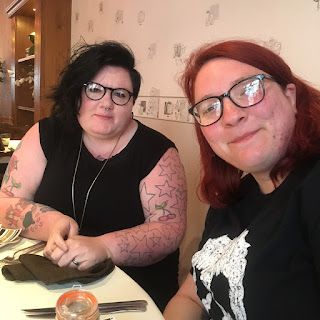 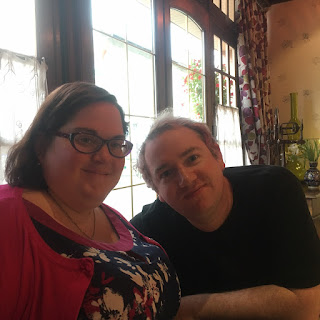 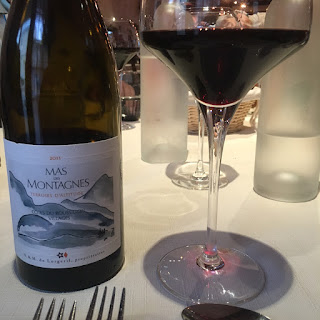 This gorgeous wine. Apparently they sell it at Majestic so I'm really going to have to buy some 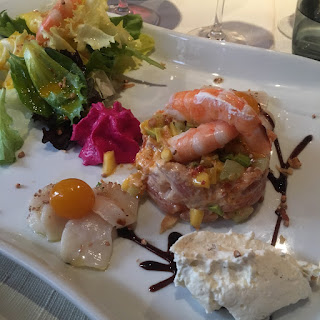 Starter - salmon tartare with prawns. The salad had a nice orangey dressing on it. The purple dollop in the middle was beetroot sorbet. The scallops at the front left were something I haven't eaten before but I quite liked them. The blob on the front right was cream cheese. The tartare itself was creamy, cold, and delicious. So good! 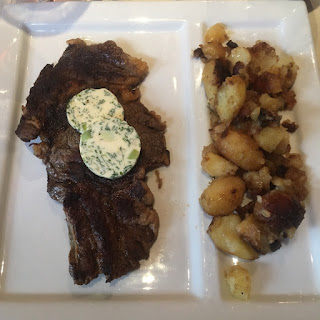 I like my steaks well done and this was perfect. The garlic butter melted into it beautifully. The potatoes were crispy and buttery. Bettie and Jen both had steaks too, only they had theirs blue - way too rare for me! 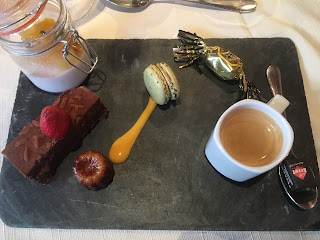 My dessert was this trio - panna cotta on the top left, which I've never had before, a chocolate fondant thing bottom left, and a yummy macaron. There was also this tiny cup of coffee which was great too. Perfect!
Posted by Rebecca at Wednesday, July 05, 2017