What I Wore June 30th

I lied, I do have one final Cornwall post, although it's only what I wore to travel home in. It was hot, so although I really dislike my upper arms and usually cover them with a cardigan, I threw caution to the wind and just put this dress on. It's one of the Lollidot dresses and I love the hearts. I hadn't worn it all week, but knew it would be cool and comfortable to drive home in.

I wish it had pockets - similar dresses do and I really like them to put my phone in. I was talking to Lolly herself about these a couple of weeks ago when I met up with her in Meadowhall and she suggested sewing pockets on - so I might just do that at some point! The wind was blowing right up my skirt, but who cares, I think this is a cute photo! 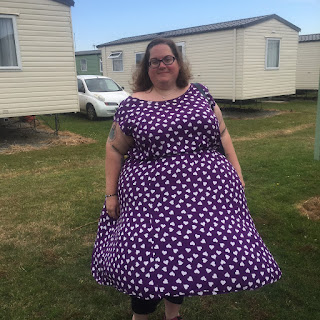 Oh, finally finally, here's the caravan we stayed in all week. We stayed at Park Dean resort in Mullion Cove and this was the cheapest of their caravans and the second cheapest of their accommodation. They have lodges which are cheaper but they honestly looked tiny. This was the cheapest caravan though. It has two bedrooms and you can supposedly sleep two people in the lounge too - I think though that six people would be really crammed in, but it's fine for a couple or a couple and a baby. I really liked it, although it was really hot inside most of the time and we could have used a fan! But it's cute, isn't it? 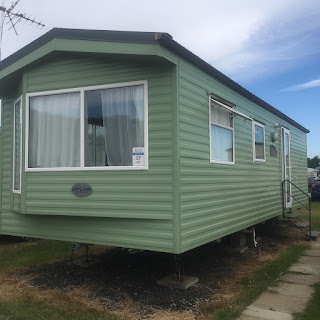