At the end of October Lee and I went to Manchester for an author talk. Young Adult authors Becky Albertalli and Adam Silvera were on tour throughout the UK and Ireland, talking about their new book, What If It's Us, which they've written together. I heard about this event months ago and booked tickets straight away. I booked a general ticket for Lee, but for myself I got the one that included a copy of the book and a promotional poster. I was really excited for the event and it felt like it had been months before it actually happened!

Lee and I went across to Manchester in the morning; we'd bought sandwiches for lunch and parked near Manchester Central Library to eat them before we went in. The event started at 1, and lasted just over an hour. It was hosted by Lucy, who asked questions, and then there were questions and answers at the end.

I'm a big fan of Becky's books (my tag for her is here) and although I've only read one of Adam's (here) I like him as a person. I've got high hopes for reading their joint book, I'll have to go to it soon.

After the talk there was a signing. There were LOADS of people there. The tickets had said that Adam and Becky would sign their joint book and then ONE other book by each of them, but people had clearly ignored that because everyone had about five books with them. It was kind of a pain because the queue moved extremely slowly; we were queuing for about an hour and twenty minutes, and we were only about two thirds of the way down the queue... I bet Becky and Adam were glad when it was over!

Lee and I left the library about twenty to four and, feeling a bit cold, popped across the road to Caffe Nero for a hot drink. I can't say I've been in Caffe Nero too often but their decaf coffee was really nice - it tasted like the caffeine one!

Once we'd done there we headed down the street to Revolucion de Cuba. I'd seen on google maps that it was close by, and looking at the menu it sounded great. It turned out that tapas was 2 for one on Sundays, and we were cocktails! So we had tapas, and I had four extremely delicious cocktails. I'd definitely go back - I liked the ambience of the place and the food and drinks. Lee's not keen on tapas as a rule but he really enjoyed his, too.

I'd put this Scarlett & Jo skirt on partly because it's warm and the weather had dropped cold. I paired it with this plain turquoise t-shirt from Yours clothing. It's a good look on me I think. I'd chosen blue jewellery and this new rollerboot pin badge. I bought a few badges in the sale on Punky Pins and this is technically a "second", but it's got one mark on that is barely visible, so it was a real bargain! I wore this same outfit the next day too to go to craft club! 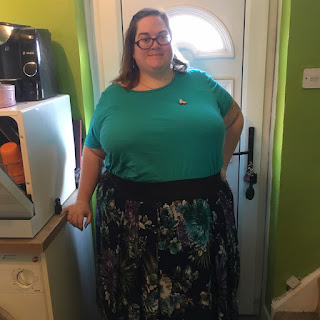 I adore this skirt, I love the pattern on it 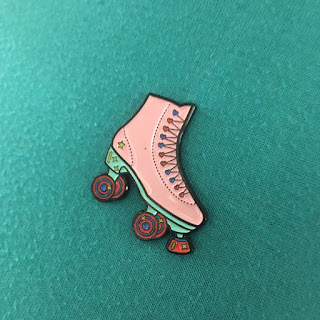 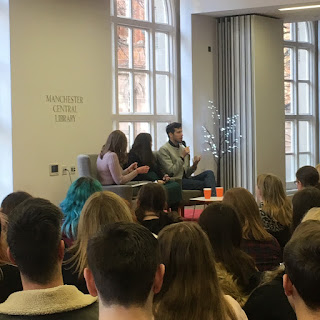 Becky and Adam in conversation 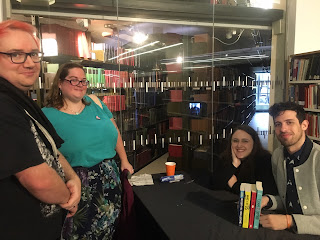 Us and them at the signing! 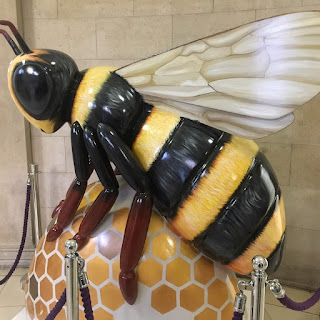 This bee lives in the library 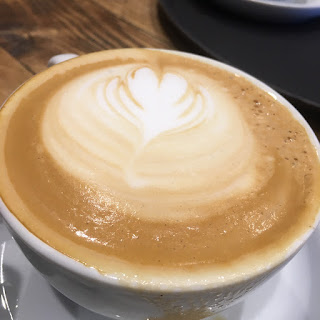 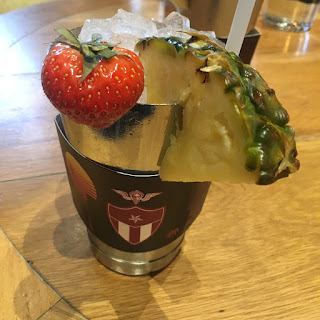 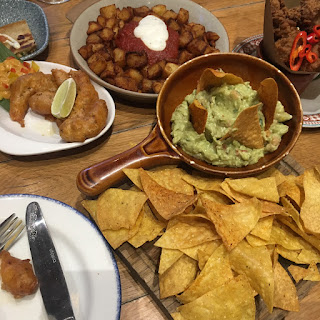 Those nachos were amazing, as were the prawns 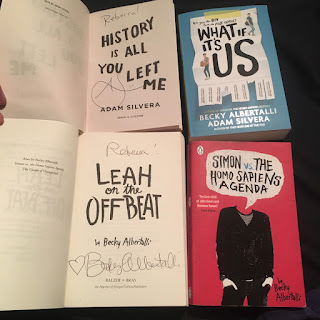 Finally, here's all the books I got signed!

Email ThisBlogThis!Share to TwitterShare to FacebookShare to Pinterest
Labels: day trip, scarlett and jo, writing, yours