In October me and Sam and Jacqui went to see Miss Saigon in Bradford. It's one of my favourite musicals; I last saw it four years ago in London. When I saw it was touring I asked Sam and Jac to come with me. Neither of them had ever seen it or knew the full story, so it was nice to see with them.

We met in Bradford for tea first. We went to My Lahore which is just up the road from the theatre and which serves really yummy spicy fast food including curry, kebabs, all kinds of things. It's cheap too. We shared a starter platter and some onion bhajis. Then I had keema mince on chips with cheese, which is spicy and warming and junk food and delicious! I really can't complain.

We went down to the theatre and had a drink before the show. As soon as it started I was in tears, I love the story and music so much as it's a show I've loved since I was very little. It was so nice to see again.

I didn't take many photos and none of my outfit (I can't even remember what I was wearing), but I had bought Jacqui these Minnie Mouse ears from Etsy for her birthday which she really liked. Doesn't she look cute? 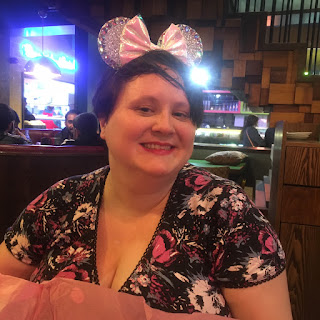 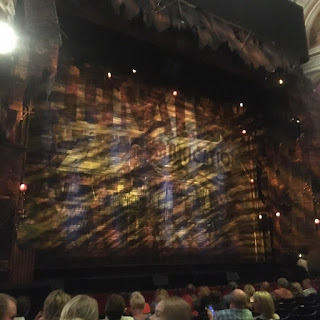 The backdrop for the show!
Posted by Rebecca at Tuesday, December 04, 2018