A Crochet Heart for Owen

My friend Stacey had a baby back in June and I was considering what to make as a gift for him. I tie dyed some sleepsuits for him actually when we were tie dyeing in August, but I wanted to make something else. I wasn't sure what, but then in the course of tidying up, I came across this polystyrene heart that I had bought ages ago to make some kind of decoration with. I thought it would be perfect for a baby.

I crocheted a long strip to go round it, in a rainbow of colours. (Owen is Stacey's rainbow baby). I had all the yarn already on hand, I just picked out the brightest colours. I did seven rows of each colour I think, using the heart as a guide for width too. I doubled up on the lilac so that I could us that at the top of the heart, and then reversed the colours. The crocheting took no time at all. I didn't sew in the ends because I knew I could just hide them when I sewed the strip to the heart.

I did that with a length of red yarn and a darning needle. I tried to be neat, but went off course a little bit as you can see. But, it looks perfect from the front. Crochet is very forgiving and stretched easily into shape.

I found some cream aida for the cross stitch and pulled out black thread and red, orange, and yellow threads, again stuff that I already had on hand. I wasn't sure which font to use for Owen's name, so I googled a lot. I finally went with this pattern, which is called Beloved, which I thought was lovely. The cross stitching didn't take very long either and I'm pleased with it.

I sewed the cross stitch on to the heart using little cross stitches in the corners, with lilac thread. It's delicate but I thought it looked good. I'm really pleased with it in general!

Stacey loved it and says it's going in Owen's bedroom when he moves into it. His first name is one they both liked, David is after his dad, and Branwell is after Branwell Bronte as Stacey and Dave got engaged and married in Haworth. Isn't it a lovely name?

I like the heart, and I'm glad Stacey does too! I hope Owen does also as he grows up. 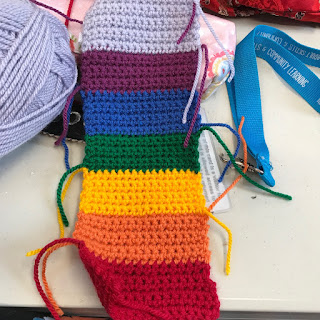 The long strip. I was making this at craft club 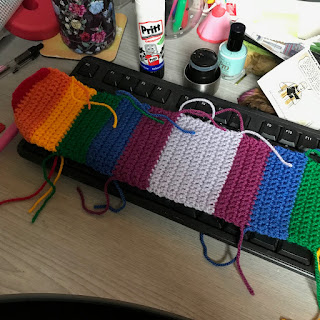 Later that day when I'd done the whole strip 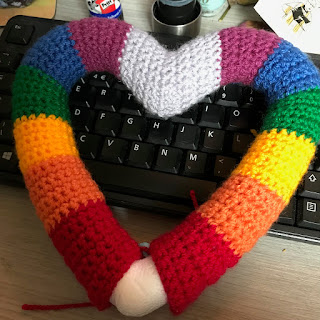 During sewing on, I tried really hard to balance the colours right and I think I managed it. I sewed the two red ends together so it looked like a continuous strip 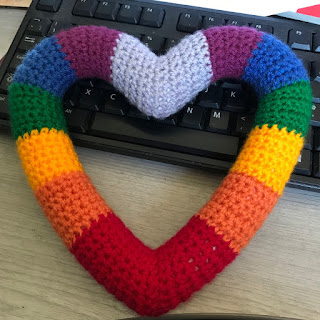 See, once it's done you can barely see the join 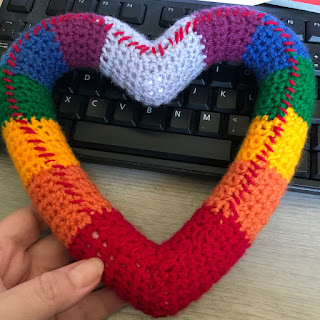 My sewing isn't bad, it went a bit off on the left there but is basically fine! 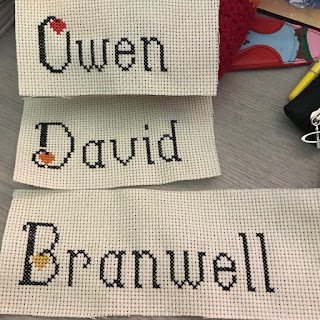 Once I had finished the cross stitch. I cut the pieces down to size a little bit before I put them on the heart 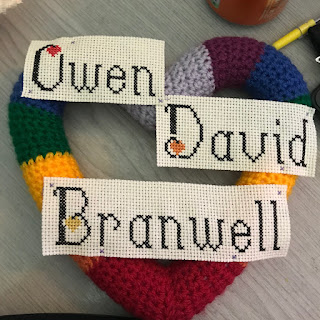 And finally, once I had sewed them on! Isn't it cute? I'm impressed with myself