Trip to Todmorden and Hebden Bridge

At the end of October my BFFs Sam and Jac and I went away to Todmorden overnight. It wasn't for anything special, just for the sake of being together and having some fun. Sam works Saturdays so we weren't sure what time we would be able to set off. I suggested that we went to Hebden Bridge because I've been meaning to go for ages. I looked for accomodation in Hebden Bridge but it was expensive, so I looked a bit further away in Todmorden.

This apartment popped up and it was perfect for us, especially as it has on site parking. I booked it and we made plans to meet in Huddersfield first. Sam managed to finish early so the three of us met at the Turkish restaurant and had lunch. I had cheesy poppers and then vegetable kebab, both of which were really nice. We set off to Todmorden at around 2pm. It didn't take long to get there but there's a lot of twisty, turny roads to get up there!

The apartment was absolutely gorgeous, really clean and with a lot of amenities. I would recommend it, if you're ever up that way! The host, Shirley, was really lovely too. We told her we were just planning to stay in. We had brought supplies! We all got into our pyjamas really early and watched terrible TV. There were a couple of games so we played Trivial Pursuit and then Speechless, which we ended up modifying into charades. It was a fun evening, really funny times with my friends.

On Sunday morning we left the apartment at around 10am and went into Hebden Bridge. We parked and walked across one of the bridges towards the market. The market was so good - there were so many stalls selling delicious food and handmade things. I honestly could have spent a fortune there! We walked down to the ducks and then popped into a tea room for breakfast. A hot chocolate and a currant teacake later and I felt so much better! I hadn't slept well and I've been having a lot of pain problems and driving has been difficult. But I wanted to press on.

I bought Lee some bread and some brownies as I knew he'd like them, and then I suggested that we went up to Heptonstall to see Sylvia Plath's gravestone. It happened to be her birthday, so it felt apt. I've never been, even though it isn't that far away from where I live. I'm a huge Plath fan but I thought the grave was hard to get to, like a steep walk from the village. However, when I googled it, someone on Tripadvisor had said that it was easy to find, so we set off. It is a bit complicated, but you can drive right up to the church, and then the grave is in the cemetery just across from it.

It was moving to see her grave, I'm really glad we went. You can read more about it here on my book blog.

After that we drove through Mytholmroyd to go to Sowerby Bridge for lunch. The countryside around there is just so beautiful and breathtaking. I really haven't spent enough time up there in recent years. Sam suggested going to Temujin which I've been to before, but years ago. They do an endless buffet now, where you go to a buffet and choose noodles, vegetables, protein including tofu or meat, then hand your plate to a chef who stir fries it all fresh. You can choose from a bunch of different oils to cook in, and then from a bunch of sauces. It's quite fun to do. For my first go I had Quorn and veggies in Penang sauce, which was really spicy but really delicious. Sam and Jac both enjoyed the variety of meat on offer, including wild boar and kangaroo!

After lunch we headed back to Huddersfield where we said goodbye until next time! 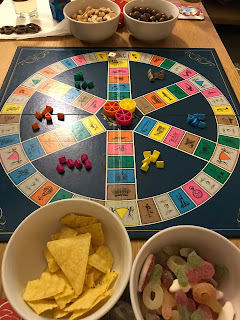 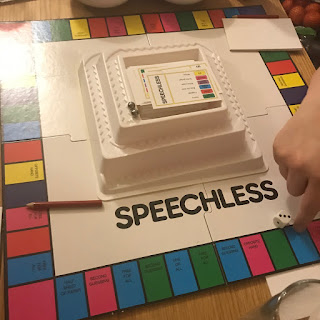 And then Speechless, which was boggling and didn't have a timer but had silver balls coming down the tower instead? Weird 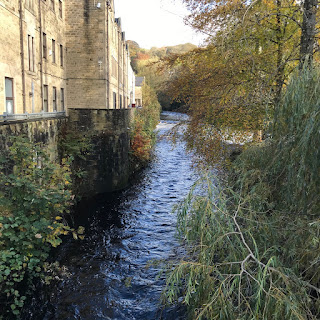 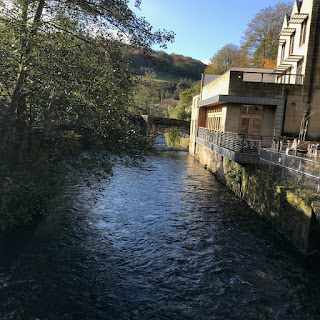 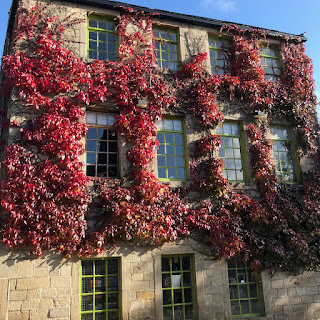 How pretty was this plant? 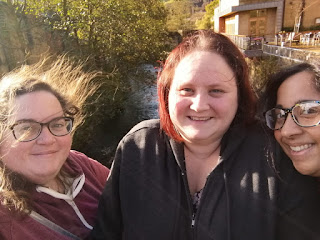 Me and Jac and Sam, I love this photo! 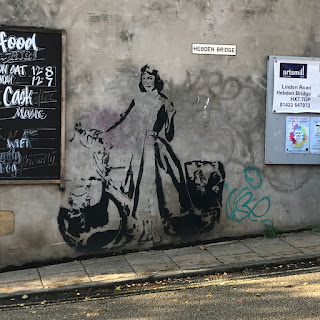 I'm pretty sure this stencil is Sylvia Plath 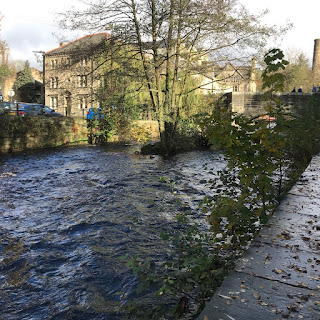 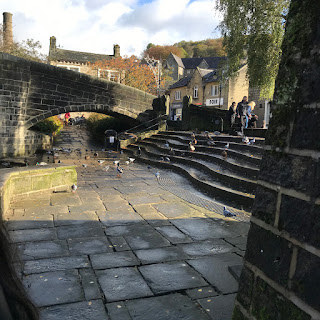 These ducks are really friendly 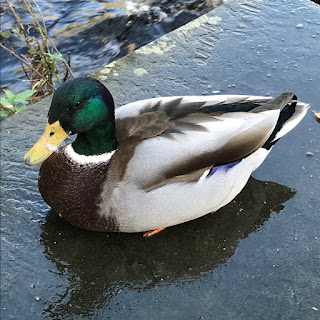 Especially this one, who let us get up close 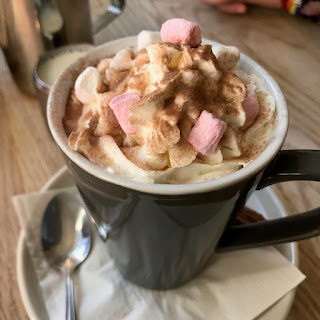 I do not eat enough currant teacakes, for sure 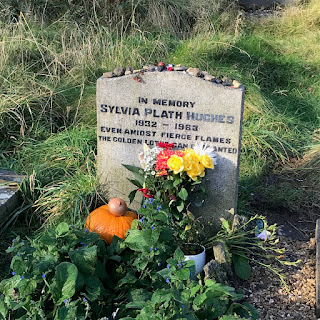 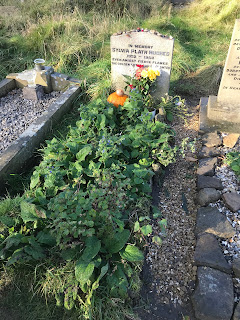 It's got stones left on it, and pens, which I liked 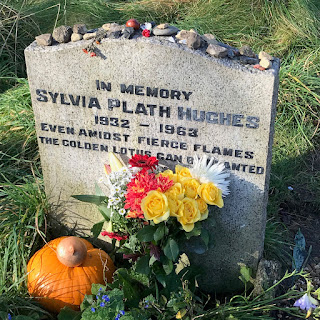 The epitaph is from the Bhagavad Gita 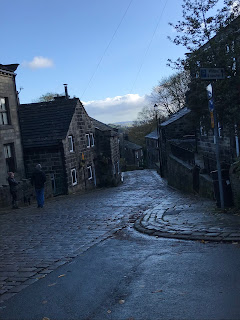 Looking down the road in Heptonstall, isn't it gorgeous? 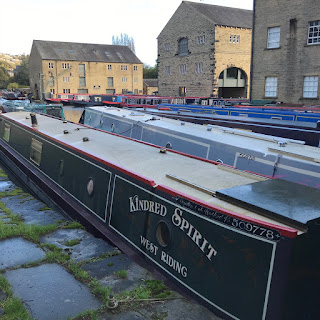 The canal at Sowerby Bridge 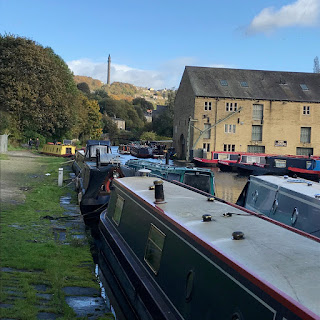 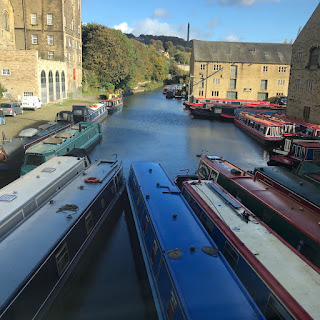 I took this from inside the restaurant 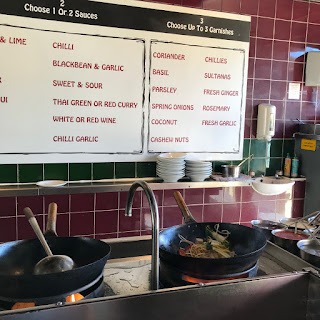 A look at some of the stir frying 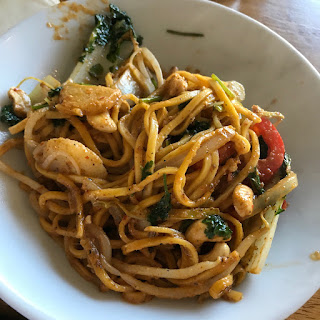 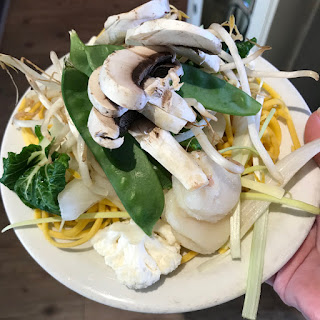 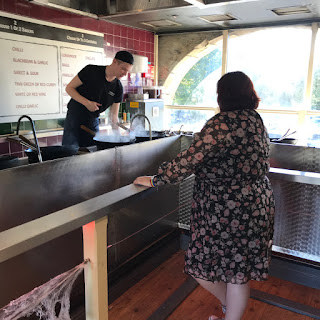 And here's Jacqui waiting for hers to be cooked!