Lee booked a week off work at the beginning of November. We had talked about going abroad, but it was supposed to be just after Brexit and we didn't know how easy that would be. I really wanted to go to Grassington, in North Yorkshire. We went for the day a couple of years ago when we were staying in Aysgarth, but I've always wanted to go and stay. We looked around on all the usual sites but to stay there for a week was coming up really expensive. We could have stayed nearby, but when I thought about it I realised I wanted to stay in Grassington itself where everything is in walking distance.

So we compromised by deciding we would only go for four nights, which wasn't out of budget. We booked a flat above a cafe right on the main square. You had to go through the back door of the cafe and up some steps, but there was a locked front door which helped. There was a good kitchen, a teeny but okay bathroom, and a big living room. It had a huge couch which was nice to snuggle up on, and then in the attic it had a bedroom. It was very cute, I would recommend it so if you want details just ask!

We decided to go Sunday to Thursday, so on Sunday we set off via Ilkley. I had a gift voucher for the Vintage Inn chain, and it happens there's one of their pubs right on the Cow and Calf rocks on the moors. It's even called the Cow and Calf! We booked a table and set off around 11.30. We went through Leeds which was nice, we don't usually drive up that way, and go into the pub for around 1pm.

It was so busy, so I'm glad we had booked. We were sitting right in front of the fire (which wasn't lit, it didn't need to be) and we liked the ambience of it being so full. I went for a roasted tomato and almond tart, which came with roast potatoes, a Yorkshire pudding, vegetables, and more - basically all the trimmings of a roast dinner. I enjoyed it; the tart was a little bit different but I liked it. Lee had a roast turkey dinner. We both had a mini pudding which come with a hot drink, so I went for a cappucino. We both had brownies, they were nice.

Afterwards we set off to Grassington and got there around 3.30pm. The cafe was still open so we spoke to the owner of the cafe and the flat, Jess, who was lovely. We got settled in and just decided to stay in when it got dark, watching films and just relaxing.

It turned out that this week in Grassington, Channel 5 were filming a new remake of All Creatures Great and Small that is due to be on at Christmas! So they were using the square as the setting for a county show, so they were taking down all the shop signs and making them look like other shops, as well as setting up a fair in the middle. It was so interesting to see and made for some interesting photos! Bear that in mind as I was taking pictures all week, as more and more things happened. 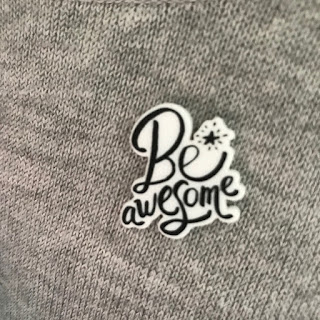 I picked out this pin badge to put on my cardigan 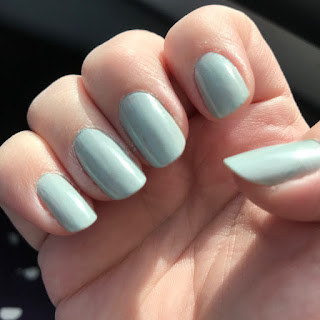 My nails were Lake by Zoya. I love Zoya polishes and recently got a group of six of them for about ten pounds on eBay. This is one of them and I love the colour! 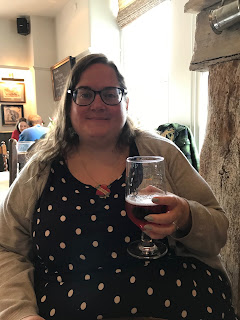 Me drinking cider in the pub 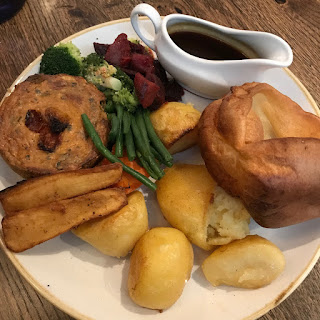 My dinner - and you can get refills of gravy which was good! 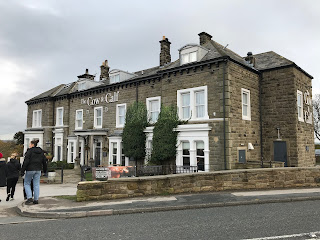 And finally the pub itself, high up next to the Cow and Calf rocks :)