On the Monday of our holiday, we went to Long Ashes health spa in the neighbouring village of Threshfield, but before that Lee went across to the village bakery to buy croissants for us for breakfast. It turned out they also sold vegan sausage rolls, so he bought a couple for tea later!

Croissants felt like such a holiday luxury, it was a lovely way to start the day. We drove to Threshfield. The spa is on a caravan holiday park, but you can pay ten pounds per person to access the pool, sauna, steam room, and jacuzzi. That sounded perfect and within budget, so we had already decided we would go.

The changing rooms need a bit of a makeover, but I was soon in the pool, which is beautiful. It is L shaped and plenty long enough for a good swim. Not too warm, but not too cold either. We swam around a bit and then went in the jacuzzi. It's really big and it's got plenty of seats, and it was lovely and warm. We both really enjoyed it. I also went in the sauna, but the steam room was too hot and steamy for me, so I didn't bother.

We got out around 1.30 after a couple of hours. We showered and then had lunch in the cafe of the spa. It was nice food but it took absolutely forever to come which was annoying as we were hungry.

We drove back to Grassington via Arncliffe and then decided to go to the Stripy Badger coffee shop. It has an attached bookshop but I saved that for the next day. The cafe was really nice - we both had caramel shortbread which was homemade and delicious.

We got back into the flat around 5pm and hunkered down for the evening. We were both tired; Lee in particular was in need of a good break, I think he even fell asleep cuddled up on the sofa! I was doing some crochet, on a new blanket that I am hoping to get finished before Christmas!

Here's my photos from the day: 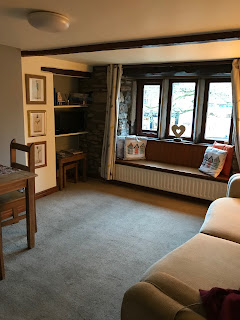 This was the living room of the flat. We both enjoyed sitting on the window seat watching the world go by outside. You can't see but there's a fairly big dining table to the left, which was really useful and nice to sit at. The sofa was HUGE and so cosy! 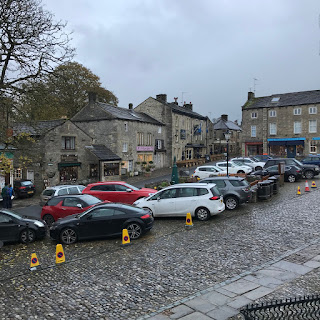 This was the square on Monday. The production company had put the cones there to stop people parking there, but nothing else much had happened. This was taken from the window of our flat 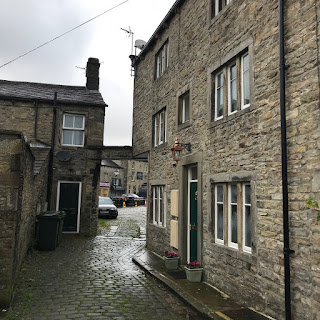 This was round the back of our cottage, to the left we had a parking space which was really good in a village where parking is limited. I loved the architecture here, I don't understand why there's a beam across the lane there

And this is the back of the cafe, that window in the middle of the photo is of the kitchen of the flat 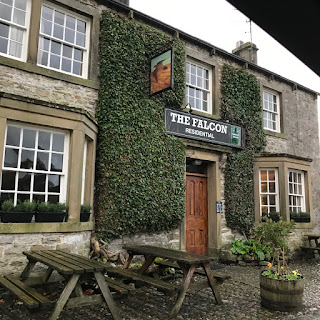 Oh, we drove to Arncliffe because it was the original filming village for Emmerdale, from 1972 to 1976. The Falcon was the original Woolpack! You can see how it looks like the one they use now. There's not much else to see in the village but I liked seeing this and it was only about twenty minutes out of our way 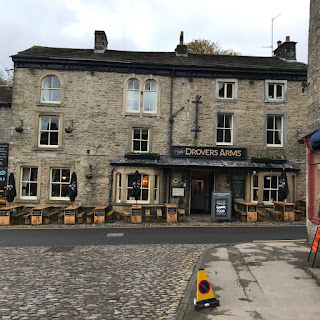 Back in Grassington, they had taken down the sign above the pub and replaced it with the Drovers Arms sign ready for All Creatures Great and Small! There was so much work going on, it was ridiculous 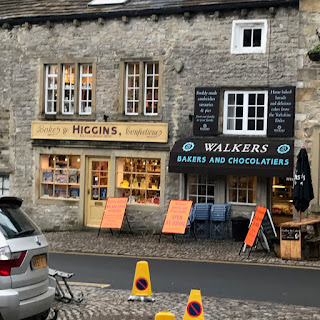 And the gift shop on the left had become the village bakery... 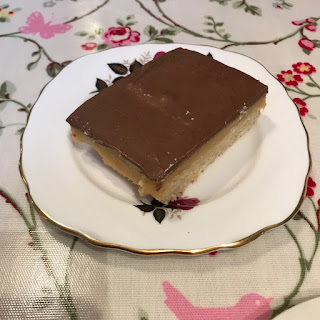 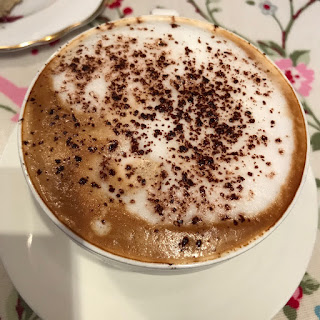 And a very lovely cappucino 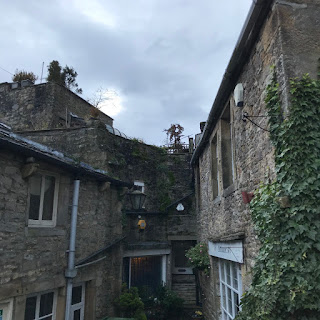 I loved the architecture here, too, just off the main square. I utterly couldn't work out which bits of house belonged to what. It was like they started off with one building and then just kept adding random bits. So cute! 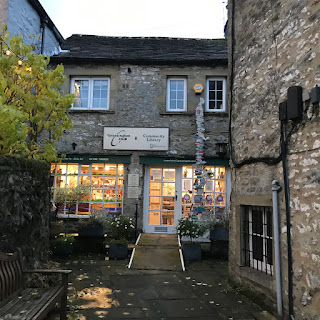 And here's the village library, housed in a really old building too