On the Tuesday of our break we had already decided to stay around Grassington and go round all the shops. We had decided to eat out, too, so I had done some research into where to eat. The pubs didn't have a lot of vegetarian choices, so I had suggested the Indian restaurant, which has a takeaway downstairs and just five tables upstairs. Lee rang up to book a table and was told it wasn't necessary, but they did tell him that it's cash only and that they don't have a licence so you can take your own alcohol - both of which are useful things to know as there isn't a cash machine in Grassington and we wouldn't have had enough cash between us. Plus, if I could take some wine I needed to buy some!

Anyway, we had breakfast and then set off around the village, starting at the bottom near the deli. I'm pretty sure we went in every shop that was open and we bought some Christmas presents and a couple of bits for me. The village was still a hive of activity with the television stuff going on outside and there were tons of tourists around too. It made for a nice atmosphere!

There's quite a few cafes in Grassington but we had already decided to go to Cobblestone Cafe for lunch. It was the one we were staying above and run by the owner of the flat, Jess. She was pleased to welcome us. Her menu is quite small, but she has some vegetarian toasties and had two veggie soups. I went for carrot and cumin soup and it was SO good. I am so picky about soup but this was really yummy. I'll have to try and make some at home.

We went back out after we'd eaten to go in the rest of the shops. The Stripy Badger bookshop was open so I had a good look around. He didn't have a huge Young Adult section but the ones he did have were contemporary books which I like to see. I bought a book as I like to support independent bookshops.

There are so many lovely shops in Grassington and most of them had really friendly people working there too, which I like. We went back into the flat at maybe around 3pm, eager for a bit of a sit down before we went out in the evening. It was my turn to fall asleep this time, all cuddled into Lee which NEVER happens!

At 6pm we went to the Devonshire Arms for a drink before we went to eat. It was quite busy with some of the television people, but we were served quickly and got two comfy seats by the fire. Lee doesn't drink so we don't often hang around in pubs, but I really enjoyed it.

The Indian restaurant was lovely! We had poppadums and pickle tray to start with, and there was a lot of vegetarian choices (and probably vegan choices too) for both starters and main courses. I had vegetable rogan josh and we shared a cauliflower side dish. The waiter couldn't have been nicer. It was really nice.

It had been a really tiring day but really lovely, too. 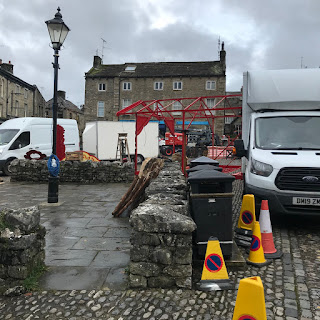 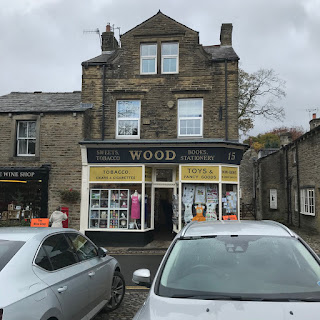 And they had turned the post office into the local newsagent 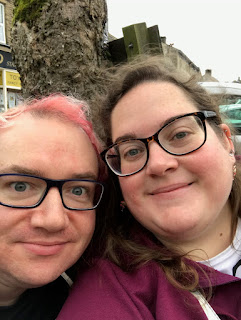 It had been raining, but wasn't raining while we were walking around, which made for a nicer day. We sat down on the benches around the tree for a little bit 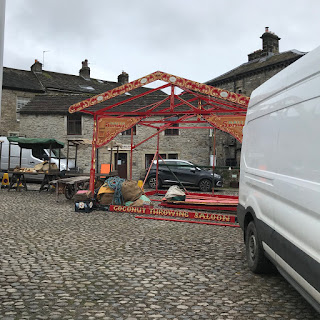 A coconut shy being built! 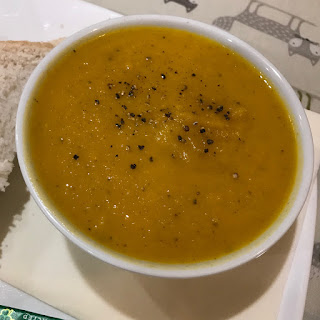 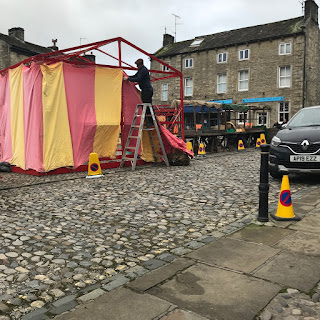 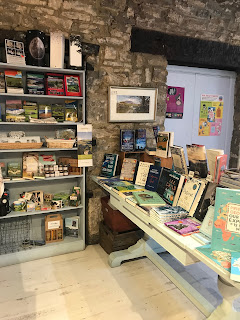 Inside the bookshop! It was nicely laid out, very inviting 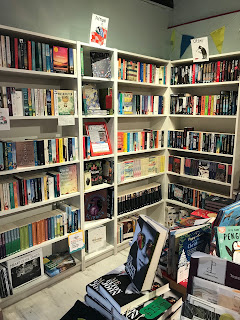 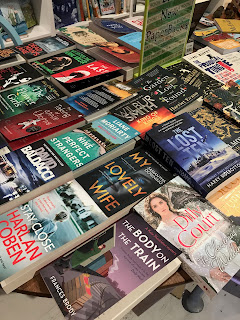 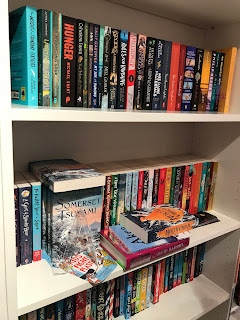 And the YA and Middle Grade shelf. Some good choices there I felt! 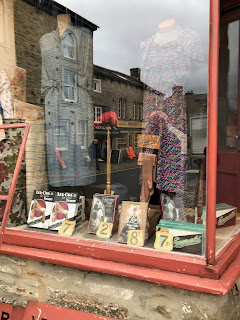 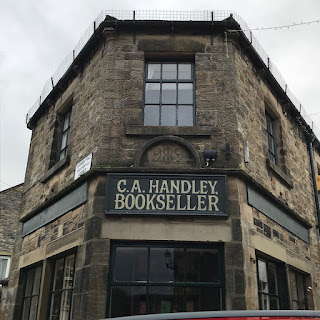 And this shop sells men's fashion items! Also, the date on it says 989, so old! 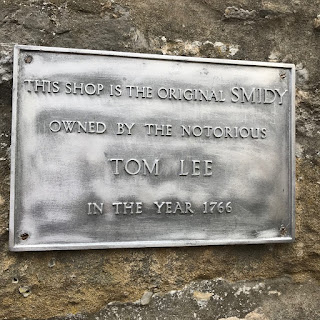 I liked this sign on a shop we went in 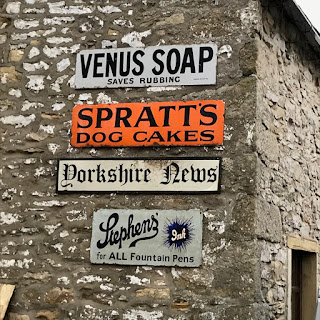 These vintage signs were being put up by the TV people too, on the side of Grassington Folk Museum which was sadly shut, or we would have gone in and looked around! 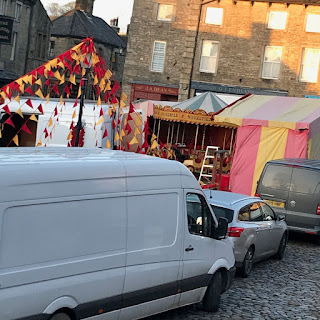 Look at the roundabout that turned up! I love these 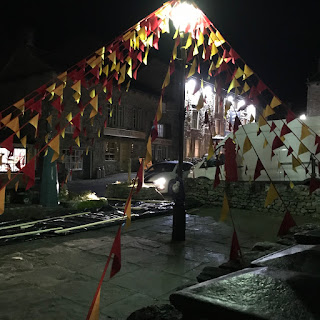 And all the bunting 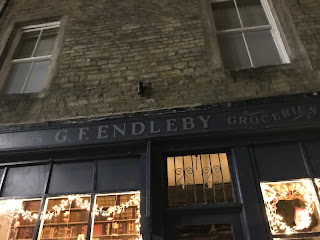 And this was the Stripy Badger after its makeover! I took these photos on our way to the pub