Food of the week - beginning of February

As previously, we had some really delicious food at the beginning of February and I thought I'd share photos. I often find it very difficult to know what I want to eat. Lee does most of the shopping and cooking, but we were getting stuck in a rut of eating the same things. I've been trying really hard for the past few months to think of new things I want to eat and to help preparing it. Lee and I have a spreadsheet for recipes that we can dip into when we need to, and we've got into the habit of chatting late on a Sunday night about things we might want to eat that week.

Lee works from home two days a week which means that he's on hand if we want to bake anything that takes a little bit more time, like roast potatoes. That has really helped us over the past year and a half with making food. I like to eat vegetarian a couple of times a week just because. Lee doesn't eat red meat or pork, so we tend to eat chicken or vegetarian anyway. Saying that, I did have a really yummy steak on Valentine's Day. We don't really celebrate it, but I popped into Tesco and got a meal deal for £20 which turned out to be excellent - it was two mains, two sides, and a dessert, plus wine, for £20. I got champagne! Which was £14 by itself - ridiculous! But it was delicious and I thoroughly enjoyed it.

Anyway, the same week as Valentine's we had these two things: 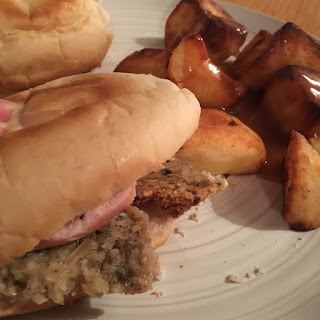 I only came up with this recently but it's SO delicious. It's roast turkey, and stuffing, in a sandwich. We roasted some potatoes to go with, and had gravy. The sandwiches are moist and delicious and yummy. I would also like to try this with some kind of vegetarian roast instead of the meat. 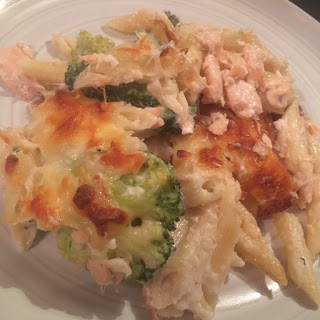 We often make salmon and broccoli pasta but I saw a recipe for a bake, made with a white sauce in. It was really good! We put cheese on top. Lee, who doesn't like either white sauce or cheese particularly much, really liked this. I would hundred percent make it again. It was this recipe. 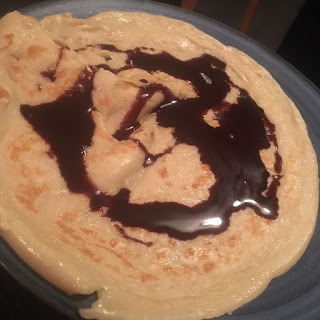 It was Shrove Tuesday so we had pancakes for pudding. We bought a jar of chocolate sauce from the local shop which you just heated up in the microwave and poured over. It was really nice and easy. 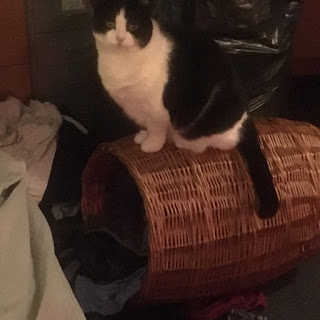 Hah and here's just a cute picture of the cat. She conquered the washing basket!