Near the beginning of February Lee and I went to Glossop to meet up with Amy and Mike for food. We hadn't seen them in ages and one of the things I want to do in 2018 is get out more at the weekends to do fun things, and I'd also like to see some people more often as I feel like there's tons of my friends that I haven't seen in ages. So I'd messaged Amy and asked if we should meet at The Globe. It's about equidistant between our house in Barnsley and theirs in Manchester, and as Amy's vegan it's perfect because all the food there is vegan.

Lee and I try to eat vegetarian fairly often and sometimes go full vegan, but we both definitely like vegan food like this. We went there with Amy and Mike but it's about three years ago, so I was really excited to go again. We got there about 6pm, and managed to get a table. There aren't tons of tables and they don't take bookings, so you can end up waiting a while for a table, but it's worth it. We were lucky and didn't have to wait, but that's the beauty of getting there early.

We ordered separately from Amy and Mike and the food came staggered, which was a bit of a shame but none of us minded too much. I had pitta bread and hummus to start with. The hummus was homemade and absolutely gorgeous - it wasn't too liquidy and had a real chilli kick to it. I really must make my own hummus one of these days. I forgot to take a picture of it though! Lee had a hotdog roll, which comes deep fried and which costs only £1.40, total bargain.

Then I had chickpea and spinach curry with tofu, with rice. We shared an order of chips and I had some vegan mayonnaise which was really yummy - I couldn't have told you it wasn't made with eggs. The curry was pleasingly spicy and the tofu was really good. The chips are homemade and honestly they're a reason to visit in themselves - chips like mum used to make!

Lee had sausage, chips, and onion gravy, which he was really pleased with. They have about fifteen main courses, including curry and chilli, and quite a few different sides dishes. It's really cheap - a main course is between £4 and £5 and really, really delicious. Perfect for vegan friends but also if you're new to vegan food!

For dessert Lee and I both had chocolate cake and ice "cream" - all also fully vegan. Lee had mint chocolate ice cream and I had Death By Chocolate which was so yummy. Desserts are around £3.50. Oh, they also have some vegan and vegetarian wines which are clearly labelled and not too expensive. I had a nice bottle of Prosecco all to myself.

We were there for ages just chatting, it was a lovely time and we'll have to do it again soon! 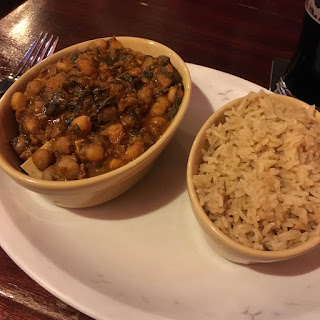 Chickpea and spinach curry - I'm pretty sure I had this last time but it's so good. The rice is nicely spiced too. Their boiled rice is gluten free, it said on the menu 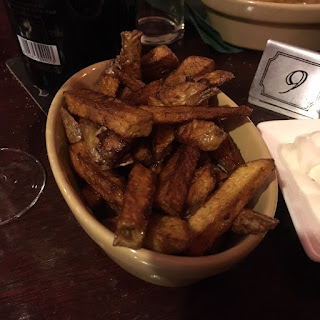 Chips, and the vegan mayo just seen on the right 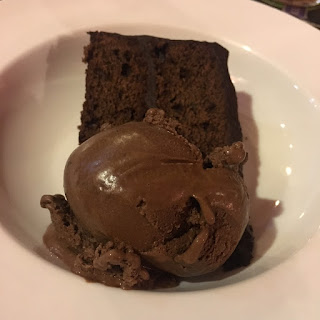