Meal out in Wakefield

In February half term I went out in Wakefield to see my friend Katie. I met Katie on my first day at university, her room was opposite mine in our house. But then it turned out that we were both from Wakefield and that we were both at York St John to study Theology. We became friends and Katie was one of my bridesmaids when I got married in 2005, she was there for me when my dad died, I made presents when both of her children were born. I am so glad we're friends - she's one of my favourite people. We don't get to see each other very often, but every few months or so.

We decided to go to Jose's tapas restaurant - we tried to go a few months ago but there were no tables, so we made sure we booked nice and early this time. Katie's been before but I never have. The owner is actually Spanish - presumably the eponymous Jose, although I'm not certain - and he came out of the kitchen a couple of times to talk to customers. He asked us if we'd enjoyed our meal, which we definitely had! The other serving staff were really pleasant too.

We got an amuse bouche of manchego cheese, which was nice. We chose seven tapas dishes between us, although I didn't get photographs. We had, let me think: rice with chicken and chorizo, manchego cheese plate, garlic prawns, garlic mushrooms, baked eggs, Spanish tortilla, and... patatas bravas. And some bread. All washed down with a really nice bottle of Spanish red wine.

I felt like the menu offered some really interested tapas bits that you don't usually see, and also tapas stuff that I've had before but which were done really well. Everything was freshly made and came in dribs and drabs, which was really nice. I liked the baked eggs the best I think - I really will have to try to make these at home. There was paella on the menu too, and also some bigger chicken dishes in case you didn't want tapas. I was really impressed by the tapas and was glad that Katie and I shared it all - we like a lot of the same stuff so it's really nice.

There were a few desserts to choose from but I went for the chocolate mousse. It was sprinkled with salt which really set off the taste of the chocolate. Katie had a liqueur coffee.

I really liked the place, it was busy for a Tuesday night as it's only small but that made for a really nice atmosphere. It is a little bit more expensive than some tapas places, but it's worth it. Every was fresh and hot and the staff were lovely. I'd definitely go back!

I took a photo of my chocolate mousse: 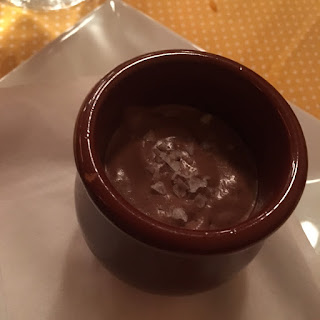