In the middle of February I went to The Mill in Batley. It's not too far away from where I grew up in Wakefield, and we used to go quite a bit when it first became a shopping centre. It used to be Skopos Mill, and it sold fabrics, so I think we even used to go there to buy fabric when I was little - my mum is a dressmaker so it was ideal. It became a shopping centre around twenty years ago maybe, along with some other old mills in the same area, which were made into flats. My dad was the quantity surveyor on some of the flats, so I always think of him when I drive past :)

The Mill has four floors in the main building, and a few shops outside. I noticed this time, too, that there's a new garden centre bit - I'll have to go in one of these days. I like to go and look round the Yankee Candle outlet and treat myself to some candles, and it's also the best place for me to buy shoes. There's a Pavers outlet and they have hundreds of shoes to choose from and do wide fit ones. I bought a pair of basic black shoes from there just before Christmas in 2016 which were so comfortable but which had started to fall apart, so I knew I needed to go back. I was trying to meet up with my friend Gillian and her baby, but Lily wasn't very well so Gillian couldn't go. I decided my need for shoes was great enough that I should just go by myself, so I went off pretty early on Wednesday morning.

I went right to the top of the mill to start with, to look at the Yankee Candle outlet first. I actually wasn't very impressed with their sale selection, although maybe it was just too far after the January sales. I like to buy the votive candles best, they burn for about fifteen hours so I can swap fragrance often and not get bored of them, but the outlet didn't have very many of them left. I got five for £5, though, and a little jar one.

Then I went for an early lunch in the cafe. There was barely anyone in there and the staff were really friendly. I had a really nice goats cheese and onion chutney panini, and sat reading my book while I ate and drank my coffee. Then I headed downstairs - I should say that the mill has escalators right up the middle and a huge lift for prams and wheelchairs, so it's easy for the vast majority of people to get around. I looked at shoes in Cotton Traders and then headed to Pavers. Oh, I think I had a mooch round the Peter Jones outlet too, because they sell nice things that you just never know if you need or not.

I ended up buying three pairs of shoes in Pavers. One is pretty much exactly the same as the pair I was replacing, one is the same brand but patent and a little bit smarter, for work, and then I bought a pair of boots because I've been after some black boots for ages but couldn't find any in wide fit for my feet. They're all leather so they're good quality and should last.

Lastly I went into The Works and bought some things for a swap that I'm doing soon, and a Star Wars book. I didn't think Lee would be very interested in it but he's ended up picking it up before me!

The Mill is a really nice shopping place and I'd recommend it if you're in the area.

I took some photos: 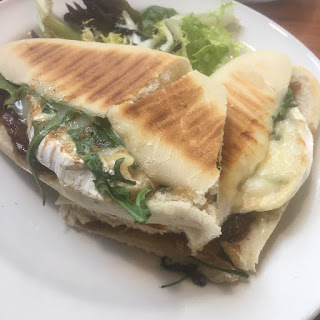 My delicious lunch. It was cheap, too! 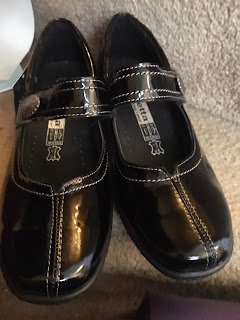 The patent shoes. The brand is Loretta I think 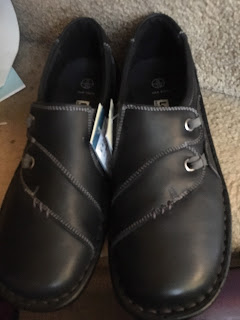 These are the shoes very like the ones I was replacing. They're so comfortable and easy to slip on and off. 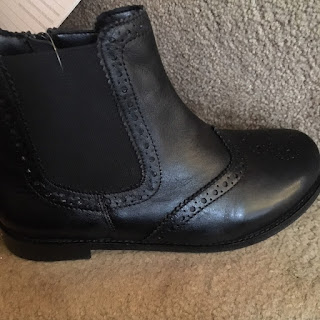 And these are my boots! They have a zip on the inside which is good for getting them on and off. They're kind of like Chelsea boots but mixed with brogues?! Lovely. 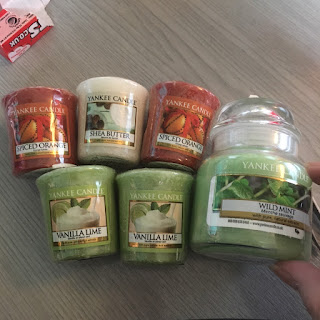 And finally here's the candles I bought. The spiced orange candles are so yummy. I like orange fragrances a lot. I've had the vanilla lime ones before, too. The shea butter smelt nice, and the little jar is wild mint which smells amazing!