Meal Out and What I Wore 29th April

On Sunday the 29th Lee and I had a quiet day at home. I was writing and crocheting, and Lee painted a second coat of paint in the bathroom. But we left home about 5pm to go to Prashad. I've been a few times with friends, but Lee had never been and that felt unfair as he really likes vegetarian food (he doesn't eat red meat) and Indian food. So last time I went I promised him we'd go, so I booked a table for Sunday evening. We set off in glorious sunshine which was nice.

We liked the food, but I felt the service was slightly lacking this time - I felt like we were rushed through a bit. But Lee really enjoyed it, which was the main thing. We shared poppadums and pickles to start with, which were nice. Lee had the chaat as a starter, which was served cold and actually a bit like a samosa salad. He really liked it, it was really spicy though!

I had the lassan paneer tikka, which I've had before and know that I really like. The paneer is seared in huge cubes, and is really spicy and tangy. The cooling sauce with it is definitely needed! Here's my starter: 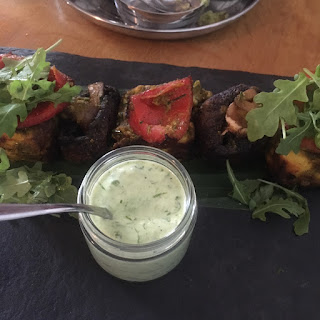 Three cubes of cheese with pepper on top, and two spicy mushrooms. It doesn't look like loads but it's really filling!

Next, Lee had the bhaji naan, which is what I had last time I went (with Janet). He really liked it. It is heavy on the garlic though, so be warned. I had the massala dosa, which is potato and onion curry served in a crepe. I love it! I totally can't eat it all though, so I cut it in half and ate half, bringing the other half home to eat for lunch the following day. 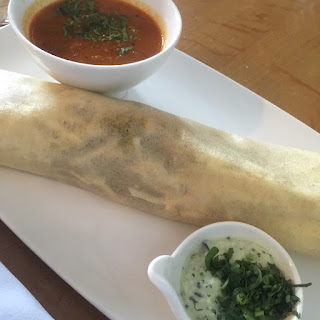 Masala dosa, served with a curry broth and mint sauce

After the food we called in at my mum's. She and I had a couple of glasses of wine each and we all chatted, it was really nice. I was wearing this Scarlett & Jo dress, which was the first one by them I ever owned I think! I love it, it's really pretty and feels lovely to wear. 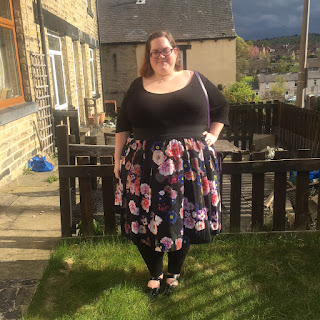 Email ThisBlogThis!Share to TwitterShare to FacebookShare to Pinterest
Labels: restaurant, scarlett and jo