I had a busy beginning to the week at the end of April. On the Monday I went to work and then left a bit earlier than normal to go to Huddersfield to meet Sam. I still managed to get loads done at work so I was feeling pretty positive. I parked on the street right in the middle of Huddersfield, near the station, an area that has had a lot of money spent on it so it looks really nice and in the sunshine you could almost imagine you were abroad somewhere.

We went first of all to Ephesus, which is a Turkish restaurant that I've not been to before. We decided to just have starters because we were going to the dessert restaurant afterwards. We shared a hot mezze platter and some hummus and some tzatziki, and it was SO GOOD. I'll have to go there again and order some main dishes, because the menu was really tantalising. It is very nice inside, too, and I bet with loads of people in it would be full of atmosphere.

Next we went across the road to Icestone Gelato. We've been a few times but not recently, so we had kept saying we should go. Sam had some kind of sundae and I had banoffee cookie dough. I love cookie dough in a hot pan, I think everywhere should serve it.

Then we headed down to the Odeon to see Funny Cow. We both thought it was going to be a lot more lighthearted than it turned out to be, but it was really good. I love Maxine Peake, but it was not a Yorkshire accent she was doing which did bother me a bit. Still, I definitely enjoyed it.

Afterwards I came home. Lee moved home that evening and it was really lovely. Some time apart had helped us a lot but it came to the point where the bad of being apart was outweighing the good and we were just missing each other too much. That doesn't mean that things are mended between us or that everything is perfect, but it does mean we're on the right path towards being better. I have written a zine about our time apart, because it's me and everything makes more sense to me if I can write it down.

Here's my photos from Monday: 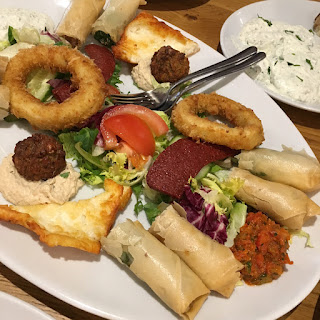 Hot mezze platter. The filo cheese parcels were my favourite 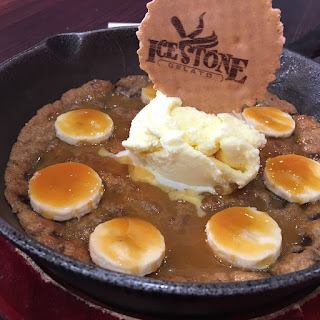 The following day I went to Leeds to meet Leanne and her new baby, who I'd not yet met. I suggested meeting at the Victoria Centre which I find really convenient and less anxiety inducing for me as the car park is right there and there's lifts into John Lewis. I suggested eating at Le Pain Quotidien because I really love it. Leanne was happy to go along with that so we met at 12.30 and went upstairs to the restaurant (there's a lift for prams/mobility reduced people/etc). It wasn't busy but the staff were really nice, and the food was as always excellent. I find it quite expensive so wouldn't want to go every week, but for a treat it's really nice. I had hot chocolate, which comes as hot milk in a bowl which you pour molten chocolate into. It was yummy! I had salmon and avocado tartine which was truly delicious. I've been eating a lot of smoked salmon recently. Lastly I had chocolate and pear cake which was vegan and SO GOOD. I also brought home half of a sourdough loaf for Lee, who is a big fan of bread. 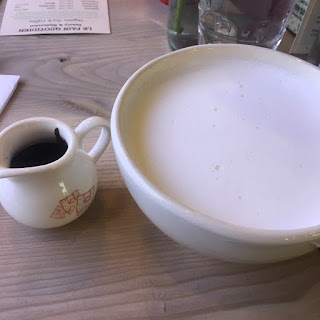 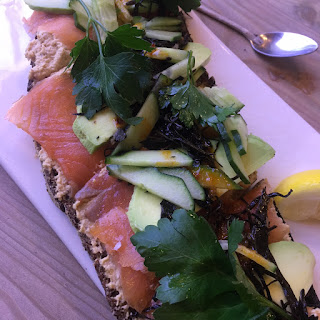 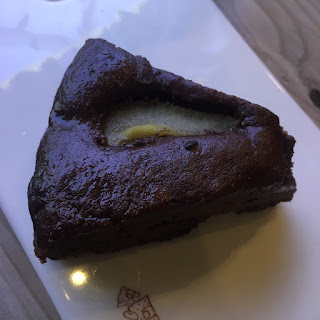 It was a lovely couple of days but I definitely need to stay in for a bit now!