Tea with Janet and What I Wore April 15th

Gosh I had such a busy week this week in April. I had taken the week off work to chill out around the anniversary of my dad's death, but I ended up doing more things than I'd do in a normal week! Oh well, it was a really nice week and I saw lots of lovely people.

I met Janet through blogging originally, but we've met in person a bunch of times and I consider her a true friend. A couple of months ago she mentioned us going to Prashad together as her mums live nearby and she would be visiting pretty regularly. So we booked in for one Sunday evening. It's open all day on Sunday and I wasn't sure how busy it would be, but it was pretty busy actually.

I had ajma paneer to start with, which was excellent, and the naan bhaji, which was garlic naan with a mashed curry, it was really nice but I'm glad I had rice with it or it would've been quite mushy otherwise. I also had a mango lassi as they're just so good. We didn't stay long but we chatted a lot in the time we had. Plus it meant I was home nice and early to chill out a bit before work the next day! (I don't usually work Mondays so my routine was all thrown out).

I wore this navy blue polka dotted Scarlett & Jo dress. Laura gave me it a few weeks ago but I haven't had chance to wear it yet. It is a size smaller than I would normally buy and I feel a bit self-conscious in it, but in the photo I think it looks nice so it's one of those outfits where I'll just fake it til I make it! It's very similar to the green dress from the same collection, but different enough to be interesting. 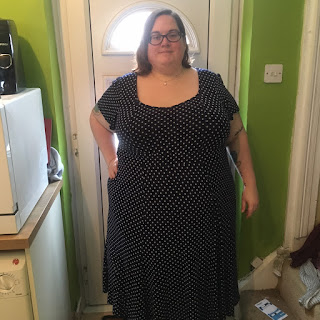 Lee took this photo before I went out :) 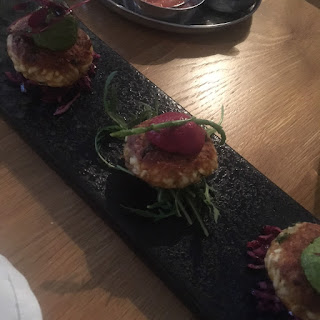 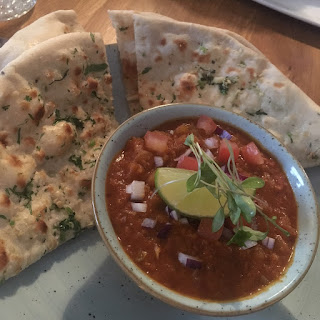 Email ThisBlogThis!Share to TwitterShare to FacebookShare to Pinterest
Labels: day out, food, scarlett and jo