Tez Ilyas and What I Wore May 5th

On the 5th of May Lee and Sam and I had tickets to see Tez Ilyas in Bradford. Sam and I have seen him twice previously, but Lee hadn't see him. I really thought he would like him though so I bought him a ticket. Lee and I met Sam in Bradford and we went to MyLahore for food. I've never been in there before, but there's tons of choice and it's cheap and it came quickly. Sam and I both had keema mince, melted cheese, and jalapenos on chips, it was so good and so junk food-y. We also shared a hug of mango lassi (my new favourite thing). Lee had a chicken burger. The place was absolutely rammed, but I would definitely go again as it was yummy and spicy.

We walked down to the Alhambra Studio, which is where we saw Tez before. We had third row seats which were ideal. Tez came on first to warm up the crowd, and then his support Simon came on. I didn't like him much, but Lee really liked his surreal humour. After the interval Tez did his show Teztify. It is funny, but also heart wrenching and thought provoking. Tez talks a lot about being Muslim and being working class. I really like his humour and Lee did too which I was pleased about.

I knew from previous experience that Tez always meets fans straight after, so while Sam rushed off for her train Lee and I walked out and joined a queue in the bar area where Tez already was, having just walked there straight offstage. However, drama then happened as the fire alarm started going off and the entire Alhambra complex was evacuated! I'm really glad our show had already finished! Tez started to chat to people on the street so I told him that I'd seen him a couple of times and he was so lovely about this, and really pleased when Lee said that he'd really enjoyed the show. I utterly recommend him, he's so funny and very astute.

I wore this ancient Simply Be dress. It was about 24 degrees when we set off and I needed something cool, so Lee pulled this out. I probably wouldn't have chosen it but I do love it, so I slipped it on.

It was a really lovely evening out :) 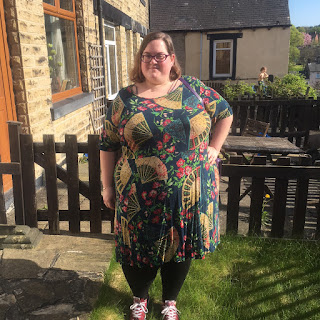 Simply Be skater dress with fruit and fans pattern 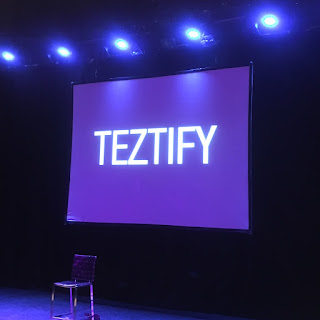 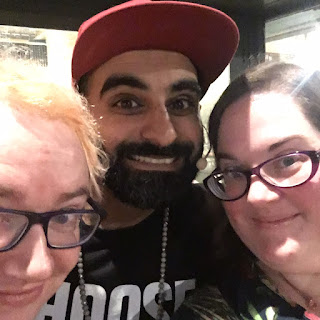 And us afterwards. I love him!

Email ThisBlogThis!Share to TwitterShare to FacebookShare to Pinterest
Labels: gig, simply be