Northwest Zinefest and What I Wore 6th May

On the 6th of May Lee and I went to Northwest Zinefest in Manchester. It was a really lovely day and I'm so glad we went. You can't go to ALL the Zinefests, but Manchester is one of my favourites, partly because it is partly organised by my friend Ingrid, and I like to support my friends.

Lee and I set off around 10am, stopped to buy lunch and snacks, and got to Manchester just after 11. The event was held at Partisan Collective on Cheetham Hill Rd, so it was easy to get to and there was plenty of parking around it. The venue isn't wheelchair accessible which is a shame. It is a DIY venue and they are trying to make it accessible. It does have gender neutral toilets which is good. I liked it, even if I didn't go anywhere other than the basement.

We had a stall against the back wall next to my friend Kirsty and near my friend Janet. I was feeling really ill so Lee set up most of our stall, bless him. The event opened at twelve and it went so quickly! It was a really hot day but cool in the basement, although I was glad we were by the open door. We sold loads of zines and did some trades. I only had a couple of looks around but I bought a few zines too. Someone Lee vaguely knows was there so we spoke to them a bit. Mostly I sat crocheting, which did get a lot of people talking to me.

We left shortly after 5pm and stopped near our house to pick up takeaway, it was honestly the best food I'd had in ages cos I was so hungry! It was a tiring day but we had a really good time.

I wore this blue Scarlett & Jo skirt and was looking for a plain white top to go with it, but came across this "Pets & Hugs & Rock n Roll" one. It still had its tags on so I've clearly never worn it. I thought it looked good!

I didn't take many photos but here's a few: 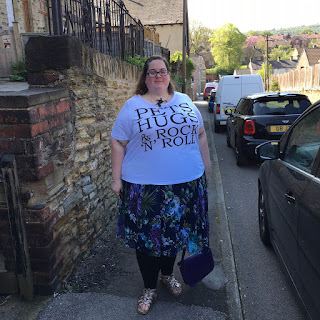 I swear this top is white, it just didn't look it in the shade! 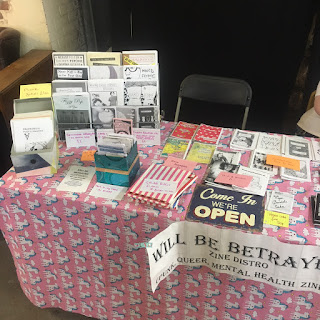 Half of our stall 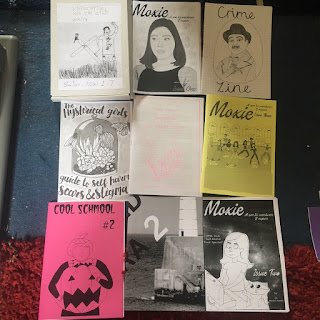 Some of the zines I bought or traded for 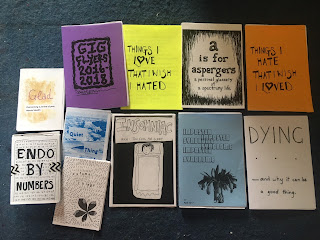 And again! I can't wait to get reading all of these!