A Year of Dates Part 1

I was browsing the internet late last year and I came across a gift that was called "a year of dates". The idea was that there were 52 different dates ideas in a box for you to give as a gift to a partner or other loved one. I liked it, as an idea, for Lee, but the cost was pretty high for what was basically envelopes in a box. Plus, you couldn't be certain what ideas the dates would have - for example, Lee doesn't drink alcohol, so anything that involved going to the pub wouldn't be that fun for him.

So I decided to do it myself. And then I enlisted help from my friend Sarah and from my aunt Caroline so that there would be some surprises for me, too. Caroline decided to include our Christmas presents into the gift, meaning there are vouchers and other bits interspersed in the year, which is really lovely and means that we can do some things without spending any money. Sarah and Caroline both made sure the envelopes got to me before Christmas, and I put them all together with mine in a nice box and gave it to Lee for Christmas, who was just quite intrigued I think!

Caroline had put one envelope to open first, and inside, right at the beginning of the year, we found a voucher for Sheffield Theatres. I had a quick look but nothing jumped out at me, so I left it for a couple of weeks and then ended up booking tickets for us to see The Commitments in October. We both love the film so I'm intrigued as to what the stage show will be like!

The second week Lee picked out something simple - bake some brownies. We did that the next day, and enjoyed them for the next few days afterwards. It was simple but fun! I also decided that it would be nice to document all the dates, so I bought us a 12x12 scrapbook and made sure to take lots of photos. I am planning that we will both scrapbook with memories and photos, and am hoping to do that once a month so we don't get behind!

The following week Lee picked out one of Sarah's envelopes which said "go to the cinema". It was the week of my birthday so we didn't have time, so we said we would do it the following weekend. Then that week's envelope was one of mine saying "go to The Globe pub in Glossop for vegan food". We've been a few times but not for absolutely ages, and it's really nice and cheap so I wanted to go again. We decided to combine the two things, and went to the cinema over in Ashton-under-Lyne first, in the afternoon. We wanted to see The Personal History of David Copperfield, so we booked tickets for just after 2pm and set off after lunch.

The film was fantastic - if you haven't seen it I would recommend it! Dev Patel is great, and the whole thing is really well done and very funny. After it had finished we drove back to Glossop, arriving at the pub around 5pm. It was already getting busy, but we managed to get a table. We ordered food and a bottle of wine, because it's so cheap. I knew I wouldn't drink it all but took it home with me. The food arrived quickly. I went for keema curry and chips, then had chocolate cake warm with ice cream. All vegan! It's a great pub, definitely go if you like cheap vegan food!

Afterwards we just came home and it wasn't too late, but it had been a lovely date day! I had pulled out this blue patterned dress that I haven't worn in forever. It's nice, I should wear it more. 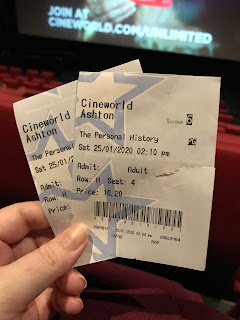 In the cinema, the heating was off in our screen so I ended up sitting under both our hoodies, but Lee was fine (he's always too hot) 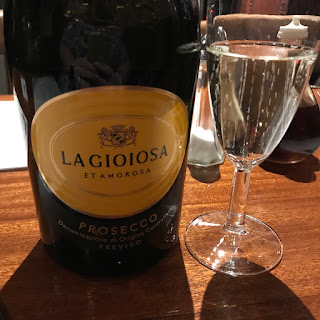 Prosecco in the pub 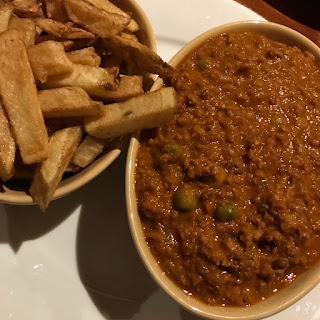 Keema mince curry and chips with plenty of salt and vinegar 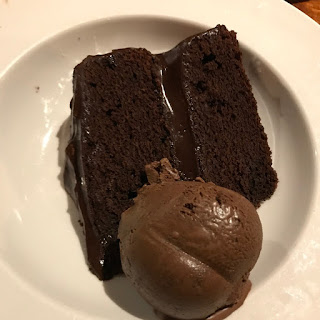 Really nice cake, but I wasn't too struck on the ice cream 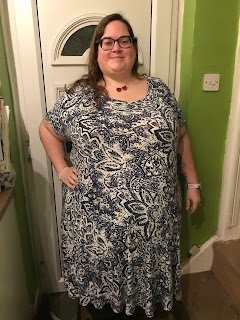 And here's my outfit! I love this pattern, I think it looks like china

Email ThisBlogThis!Share to TwitterShare to FacebookShare to Pinterest
Labels: a year of dates, day out