You know me, I love candles. I find them an excellent form of self care and have a candle burning most of the time when I'm at home. They're cheap to buy but just the very lighting of a candle and having it burn next to me is something I find very calming.

I mostly have Yankee Candles because I find their scent throw is really strong and they come in a billion different fragrances. I used to buy them from concessions in outlet stores, but I haven't in a while, mostly because I just don't often go to that kind of store. I've also found that you can buy Yankee votives - the small candles about two inches tall - on Groupon in bulk. I did that back in November some time; I bought forty votives and it was like Christmas when they arrived! I had very few duplicates, but I left some of the duplicates downstairs in the living room and also gave a couple away. I've been making my way through the votives discovering new fragrances.

I also have quite a lot of the tealights. You can buy these in packets of twelve and each tealight burns for about six hours which I find good. I have some of my favourite scents in tealights, including Passionfruit Martini and Serenity. I tend to burn them for a couple of hours at a time.

For Christmas Lee bought me a wax warmer. I had one of these as a teenager but not since, and I've no idea where it ended up. Lee bought me quite a big one from Yankee Candle and some plain tealights to go with it, and some wax melts. They last longer than the candles and I've enjoyed using them over the past few weeks.

Then I saw some of Yankee's new spring fragrances, which include a scent called Sunny Daydream. I mentioned to Lee that I would like some, so he bought me a pack of the tealights for Valentine's Day. It's a lovely fragrance, really fresh and summery. While looking for a review of it, I came across the website Wax Addicts. I clicked around a bit and found that they sell something they call Wax Crumbles. They're for use in a wax warmer and they sell 9 or 18 pots. 18 pots is £16 including postage which I thought was reasonable. They have Yankee candles but other brands too, so I thought I would treat myself to a box.

They arrived packaged beautifully, which is nice. Each pot is filled with wax crumbles. Of the eighteen, sixteen were Yankee Candles but mostly in scents that I haven't had before. Of the ones I have had, they included ones I liked, like Crackling Wood Fire, which is a gorgeous winter scent. The other two pots are a brand called Goose Creek which I'm not familiar with at all, so it'll be nice to give them a go.

I put some of the crumbles into my wax burner, in a scent called Tropical Jungle. I used probably 1/3 of the pot, which wasn't a lot in my big burner but which burnt for hours. The scent throw was great; Lee could smell it on the landing and asked which one I'd gone for. I'm really impressed with the quality of the Wax Crumbles. I will definitely treat myself to some again once I've used all these! 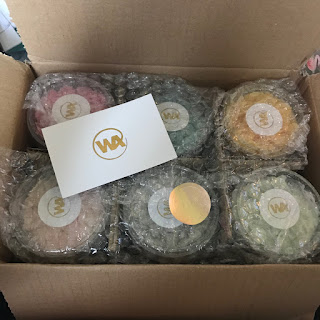 I was impressed with the cute packaging 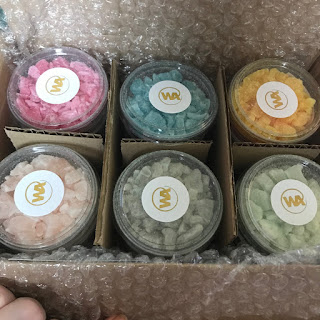 Inside are the eighteen pots stacked three high. I opened them all to smell them and made Lee smell them too. The two on the far right are the Goose Creek ones 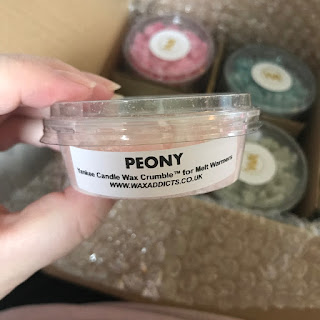 Just to show you how deep the little pot is 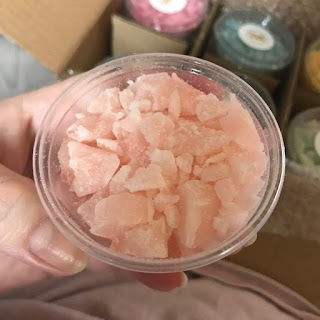 And inside, the crumbles 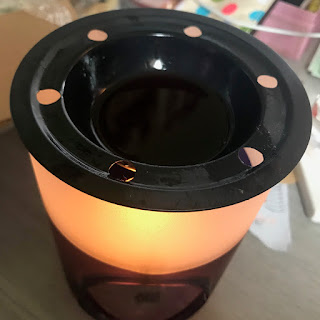 This was 1/3 of one pot when melted, but like I say it lasted ages. I didn't put the whole pot in as I like to change fragrance often - I like to mix it up a lot!

I bought these Wax Crumbles with my own money and wasn't compensated for writing this post - I just wanted to share something new to me!
Posted by Rebecca at Saturday, March 21, 2020

Email ThisBlogThis!Share to TwitterShare to FacebookShare to Pinterest
Labels: candles