Lunch Date with Chloe and Laura

At the end of January I had a lunch date at Meadowhall with Chloe and Laura. I saw Chloe not that long back but I hadn't seen Laura since last July, and she had got married since then! We met up at Meadowhall just before lunchtime and decided to go to TGI Fridays for lunch.

I had cheese nachos to start with which were good, and then vegan burger and loaded fries. The burger was really nice, I would eat it again, but the fries just weren't right for me. Not to worry! I was glad I had had the nachos, though. After we ate we walked along to Godiva and had hot chocolate, and did a lot more chatting. Then we went into a couple of shops before saying goodbye.

I went into Yours and thought they had quite a lot of good stuff on the sale rail but nothing that especially caught my eye. I actually wanted some new pyjamas but they didn't have any on sale and I didn't want to spend £25 on some.

I was wearing my bike gear bleached t-shirt and this purple/blue skirt that I really like and wear a lot. I'm also wearing new leggings; my mum bought me them for my birthday and they're high-waisted and really firm! They're quick thick and tight, but aren't too long. I wouldn't have chosen them but I quite like them. I do need some thinner leggings for when the weather starts getting nicer, though! 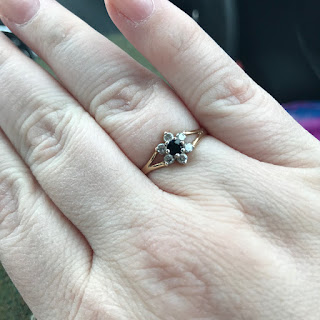 Lee bought me this dainty sapphire ring for my birthday and this was the first time I had worn it. It's quite unlike much of my other jewellery, but I really like it 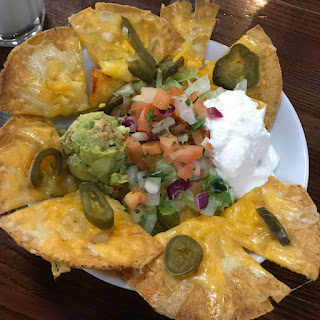 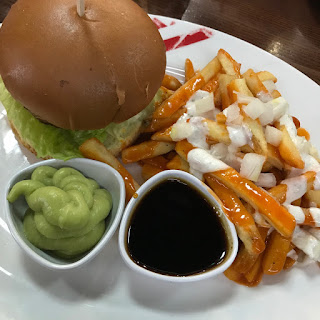 Burger and loaded fries. THe burger was pretty good, especially when I put some of the avocado dip in it, but the fries weren't for me 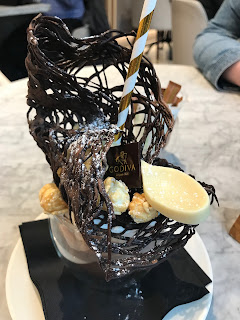 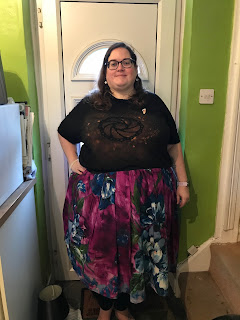 My outfit of the day

Email ThisBlogThis!Share to TwitterShare to FacebookShare to Pinterest
Labels: friends, lunch, scarlett and jo, yours, yours clothing