Sunday of our weekend away was my actual birthday! I had a shower, then went downstairs. A few people were already up. I had booked lunch out for everyone so had just provided cereal and bread for breakfast. I also popped open a bottle of Bucks Fizz because, you know, birthday.

I opened my birthday presents - I got some lovely gifts. Lee bought me a craft trolley from Hobbycraft in the January sales, and my mum had bought me a sewing machine! I knew about it, but it was cool to have it finally.

Sarah was doing some make up tutorials with Lucinda and Von so I asked her to do my eye make up. I think more games were played and everyone packed up except for the five of us who were staying another night. We left the house around 1.45 to go to a pub in the nearby village of Wessington for lunch.

I'd looked at loads of pubs in the area but none of them had very exciting vegetarian options and I felt like as it was my birthday I could be picky. I happened upon the Horse and Jockey in Wessington - they had plenty of vegetarian and vegan options as well as some delicious sounding meat options, so I rang them to book a table. She asked if we could pre order our starters and main courses, so I had already done that. I had also asked for a bottle of prosecco on the table.

We were shown straight to our table and all the staff were really lovely and helpful. The prosecco was great and they also took a cake we had brought away and brought it out to me with a candle after our desserts, along with a bunch of plates and a knife. We actually cut it up and gave everyone a piece to take home.

I had cauliflower samosas to start with which were really spicy and delicious. For mains I went for the lentil Wellington which came with the Sunday dinner vegetables and roast potatoes. But it didn't have the Yorkshire pudding and mash so I asked - they're not vegan obviously but that doesn't bother me, so the waiter brought them for me straight away. It was great because the Yorkshire pudding was immense! For dessert Lee and I shared hot cookie dough. They do three courses for £25 which I felt was excellent value.

After lunch we said goodbye to Sarah, Tom, Von, Lucinda, and Caroline. It had been such a lovely time; I honestly have the best friends (and I was sad Jacqui couldn't be there but she was too ill!). We went back to the house and Sam, Lee, and I decided it was pyjama time. Then I had brought along a bottle of champagne that either Lee or my mum gave me for my birthday last year, to share with Sam and my mum. We had a glass of that each then went across to the games room to play snooker. It was a full size table so it took forever as none of us were very good! Once that was finished we had some snacks to eat then watched TV and read quiz questions until bedtime! It was a low key end to my birthday but just perfect actually!

On Monday we managed to get packed up in excellent time and made it back home by around 10.30! It was nice to relax for the rest of the day after such a busy weekend. 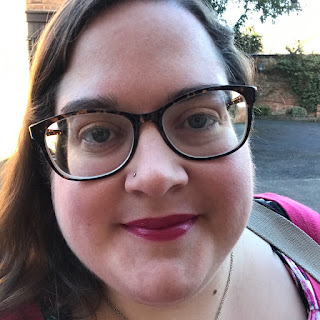 On the way out to lunch - I look alright for thirty-six, don't I? 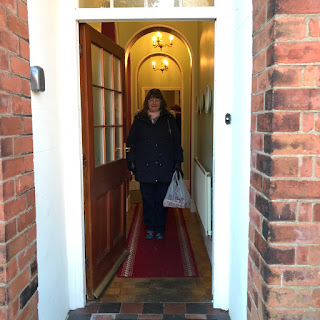 When I took that selfie my mum thought I was taking a photo of her, so I had to! 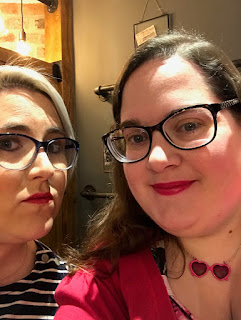 In the pub with Von 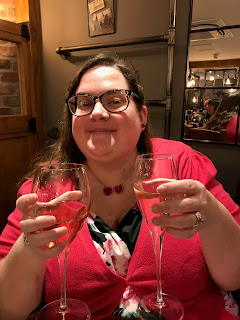 It was my birthday so I had lots of wine 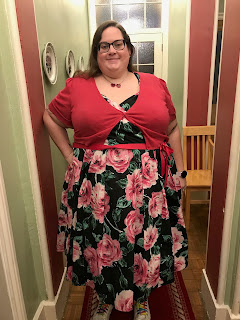 I wore this dress to go out in, utterly forgetting that I wore it last year for my birthday too. Still, it is one of my prettiest dresses and I love it 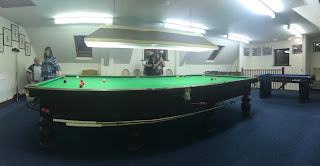 Panorama in the games room 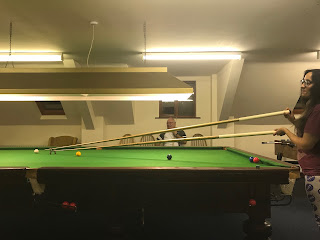 Sam had to use the ridiculously long cue and rest for one shot, so I had to take a photo 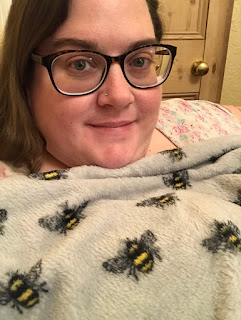 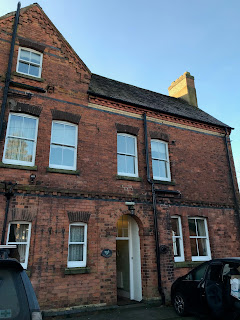 And this was the house itself as we left on Monday morning. The outside really doesn't do it justice because it was huge and well equipped!