Saturday was the full day of our weekend and I had planned brunch, then to do some crafting stuff in the afternoon, burritos for tea, and then a fun evening of games and drinks. My aunt arrived in time for brunch, and we cooked bacon and egg sandwiches with veggie sausages for us veggies. It worked well, and meant everyone was fed.

We played a game of Trivial Pursuit soon after that, which I bought for Lee for Christmas. There was enough room for people to sit down in the living room, meaning we could all sit together even if not everyone was playing the game. I was doing some crochet at the same time and so was Sarah - we were making the same blanket although I hope by the time you read this I will have nearly finished my one!

Sarah is also training in beauty and make up at the moment and she recently learnt how to wax eyebrows, so she did my mum's, Caroline's, mine, Von's, and Lucinda's! I've never had my eyebrows waxed before and honestly I usually ignore mine and let them do their thing, but I really like the shape that Sarah made them and might keep up to them!

Lucinda baked me a chocolate orange cake, it was absolutely amazing and I was sad when it was all gone! So I was banned from the kitchen for a bit while she made it.

After that, Lucinda, Sarah, Caroline and I sat in the (huge and warm) conservatory did some beading and jewellery making. Caroline and I both have tons of beads and fixings so we'd brought our stuff along. I can get a bit precious about some of my beads and want to save them forever, but I decided that I just wouldn't do that, that I would let my best friends use some of my beads if they wanted. Lucinda wanted to make some single statement earrings to wear in one ear with a stud in her other ear, and she chose one thing that I have been precious about. It's a gold honeycomb with a bee dangling off it, and I love it but had never done anything with it. So Lucinda made it into an earring with some gold and white beads, and actually I'm really happy that she gets to have it and love it so much!

My mum chose some beads and I made them into earrings for her. Sarah made a bracelet. While we were beading everyone else went over to the games room to play snooker. I love it when people just get to do what they want!

Snooker took a long time, but by about 6pm they were finished. I played some table football with Von. Lucinda, Von and Sarah played a Harry Potter game and Sam arrived around 6.30. She'd been at work, but she stayed until Monday with me and Lee and my mum and stepdad.

For tea we had burritos with all the extras. I was so happy because the cooking just happened, I didn't have to worry about it because I knew other people had it in hand. Lee, my mum, and Tom did most of it. There were two big tables in the kitchen, but as there were only ten of us we pushed the two together which was lovely as we were all sitting together. There was plenty of wine and plenty of cake and cheesecake for pudding! (Oh and thank god for the dishwasher!)

After tea it was time for games! I had made a pass the parcel. When I go camping with Amy and her lot, her brother Ste makes a pass the parcel where you have to eat, drink, or wear something ridiculous. I've had nice things like rum and disgusting things like curdled Baileys to drink, and eaten all kinds of sour and hot things. I did the same thing, but I tried to be a bit kinder. I got a job lot of masks, temporary tattoos, some chocolates, and some test tubes. Lee and I filled those on the previous Thursday. A lot of them were alcohol but we also did some with sriracha mayo, lime juice, and salad dressing. The game took forever but everyone joined in, including my stepdad who ended up with a unicorn mask, and my mum, who drank something she really disliked!

Sam made punch which tasted like Refreshers, and we also played a daft game Caroline mentioned where we had to act out the whole of a film trilogy or more in two minutes. We did Harry Potter and it was ludicrous!

It was really fun day and I was really glad everyone got on! I've got tons of pictures: 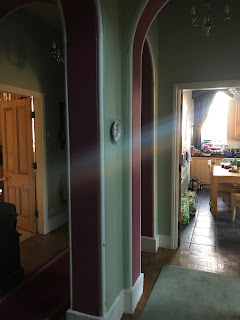 The hallway of the huge house. The lounge was on the left there and the kitchen ahead 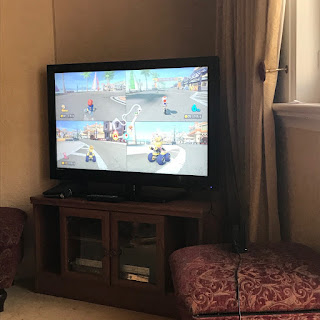 Playing some serious Mario Kart tournaments in the morning 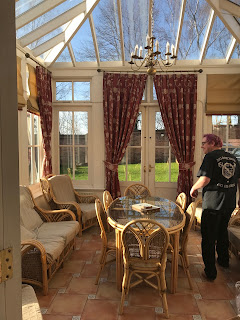 The conservatory was lovely, really warm and cosy and useful with that big table in it 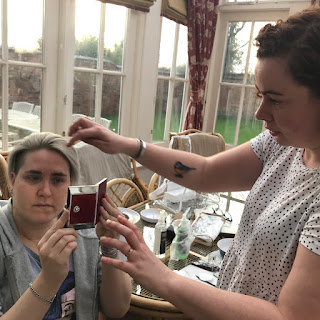 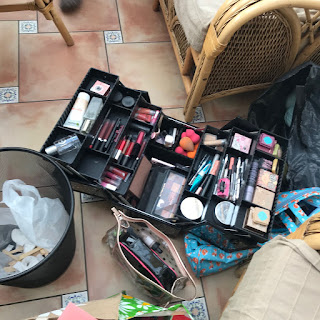 Look at her make up kit, it's amazing! 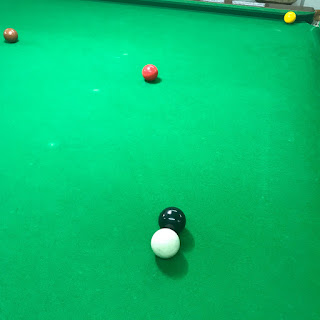 I don't think I got any pictures of us beading, so here's a snooker instead 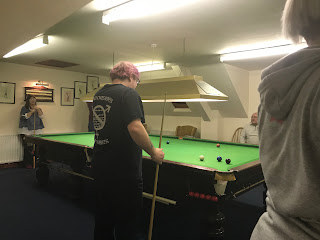 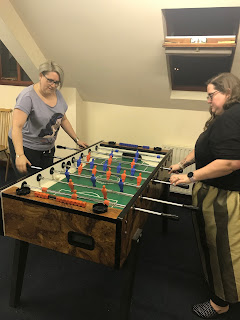 Me and Von playing table football. My slippers were so glam, can you tell 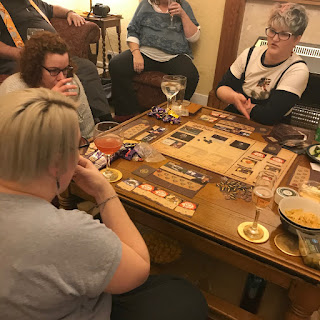 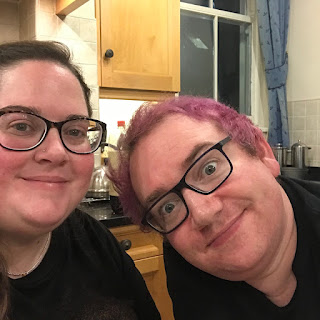 Round the table selfies at tea time. Here's me and Lee 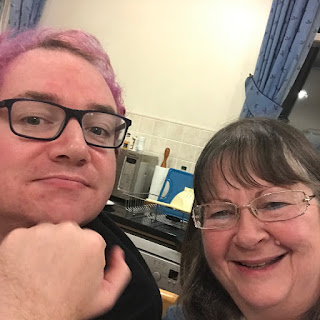 Lee and my mum 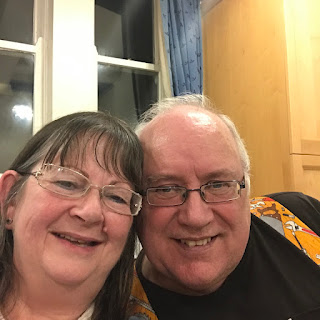 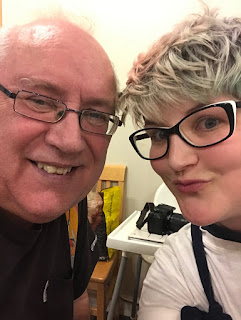 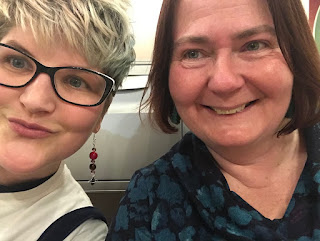 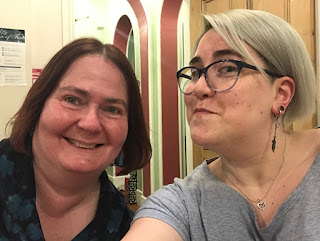 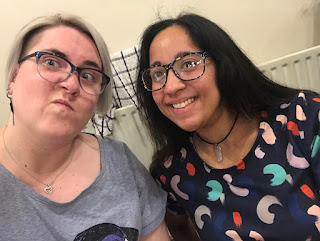 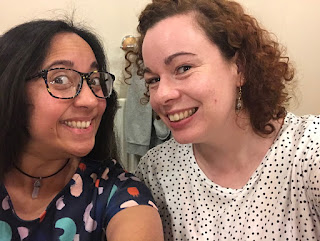 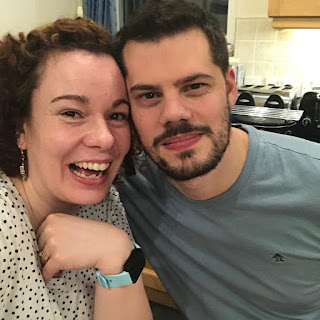 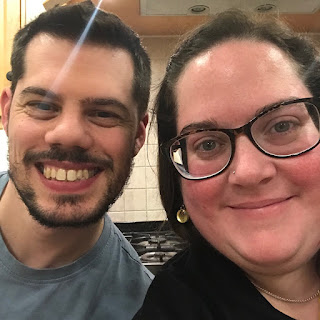 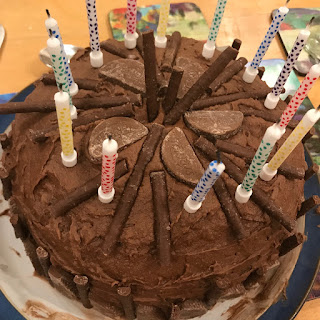 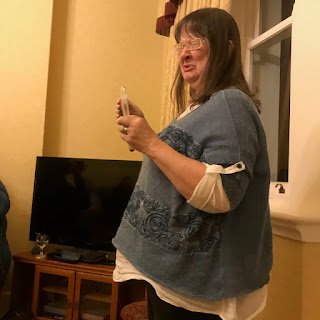 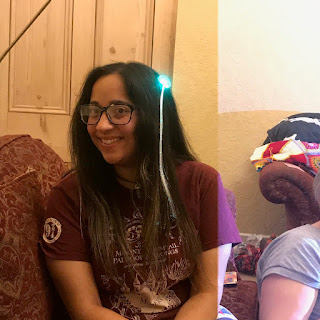 Fibre optic hair clips! I dunno why this picture is split, maybe someone took another picture at the same time? 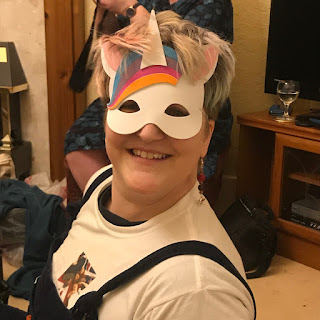 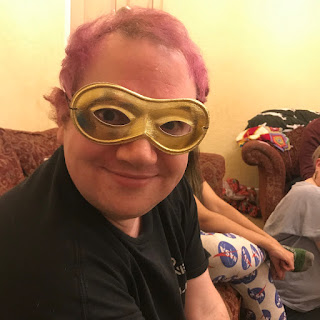 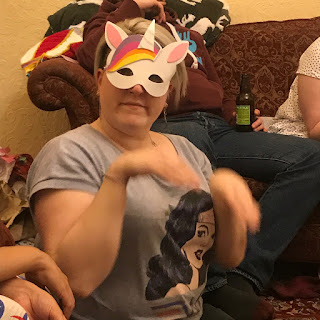 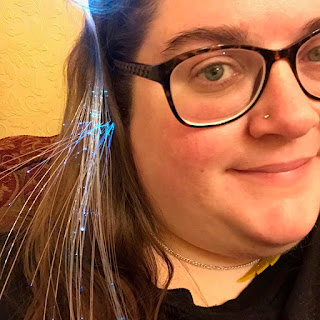 Yes it's my natural hair 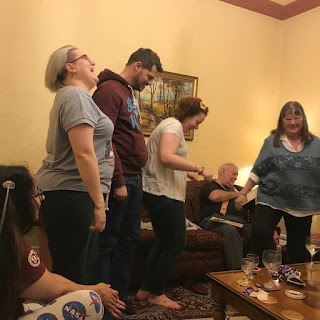 And finally this is my mum's group acting out Pirates of the Caribbean!