Eating Out in Barnsley with Sam

In the middle of October Sam came over to Barnsley. We had had plans to go to Sheffield with Jac too but she had an emergency and couldn't come. So we decided to go to the new Market Kitchen in Barnsley.

They've been building this whole new bit at the bottom of the precinct/over the market for over four years - I recently had a picture in TimeHop which showed when they had knocked down a lot of the old market. It was a shame but the town also desperately needed something like this. It is mostly finished - there's some shops in, and a Super Bowl and some other gaming stuff, and the Market Kitchen is open, and so is the Falco Lounge. I like those Lounges - they're a chain but each one is named differently, and they do good veggie food and all day breakfasts so I know I can get something good to eat if I'm near one.

Lee dropped me off about 3pm and Sam arrived shortly after off the train. We considered going in the Falco Lounge - which opens on to the library, which is very cute and which I hope makes people use the library more - but decided on the Market Kitchen instead.

It's upstairs from the market, so you could easily visit both. There are a ton of seats in the middle and several restaurants around the edge, and a bar, and a balcony. You can order from any of the restaurants to any table, like a food court, meaning you and your companions could have totally different foods and drinks but still all sit together. I like this! It's good for groups.

Sam and I went to sit outside to begin with as it wasn't cold. It was really nice to look out to the new precinct. We ordered two cocktails each on the app - I had a Lively Lychee and a Sex on the Beach. We ordered some more a little time later - this time I had a spiced rum and mixer and a mojito. There was no glass allowed outside which is why I'm guessing my mojito came in a pint glass! By this time it was around 5pm and getting chillier, so we went inside to order food.

We got another cocktail each but then left just before 7pm. Sam popped into a shop for snacks and we got the bus home - we had gone to a taxi rank but none showed up so we got a bus as it comes really close to my house which is fine. Lee was out playing a gig so Sam and I watched some of the Stand Up to Cancer stuff on Channel 4 and had some wine. It was a really good night even though it was different to what we had planned! 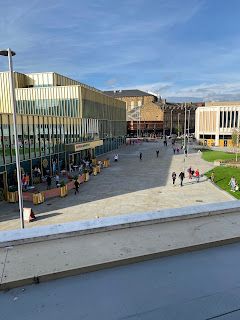 View from the balcony - the buildings on the left are Falco Lounge and the library, and on the right is Super Bowl 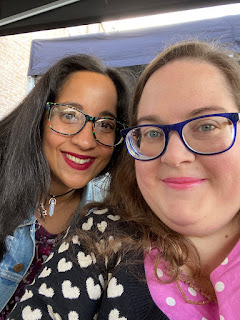 Me and Sam - one amigo down, we missed her! 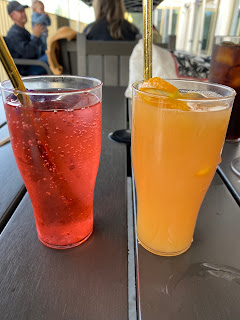 Lively Lychee and Sex on the Beach 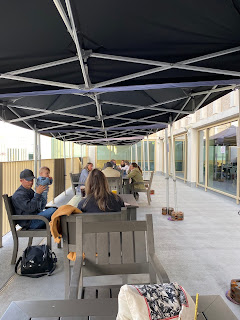 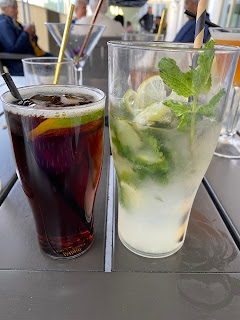 Rum and mixer and a mojito 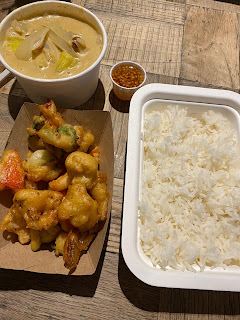 Food! It was pretty cheap too 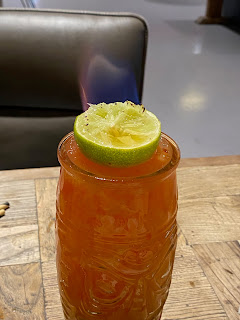 Sam's last cocktail was a Zombie, which arrived on fire, but she was in the loo so I had to take a photo of it for her 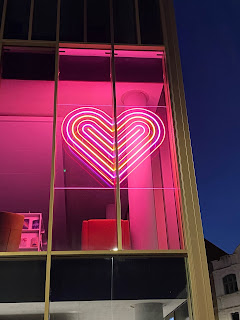 This heart is in the library 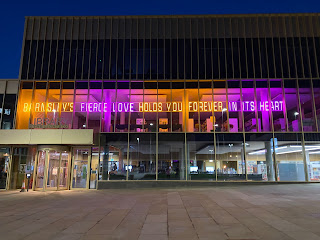 And so is this!
I really liked the new stuff, it's about time Barnsley had something like this, I will definitely go back!
Posted by Rebecca at Tuesday, December 28, 2021