On the Wednesday of our holiday we went into Lancaster. We visited absolutely years ago as I applied to Lancaster University, but that's twenty years ago. I didn't remember much of the city centre. We had looked into going to the castle, but decided against it in the end. The market is on on Wednesdays though, so we parked near it and walked through. There were quite a few stalls and I was quite impressed by it. The first stall was a wax melt stall and I bought two lots of 'scoopies' which are very cute wax beads. The stall owners were really nice! I also bought a couple of Christmas presents and a new case for my phone as my old one was very marked.

We went into the shopping centre and went in a couple of shops. The weather was gorgeous which was nice. I had googled and found there's a vegetarian cafe in Lancaster called Whale Tail Cafe, so we walked towards it. Lee went in a couple of charity shops and bought a record.

The cafe is in a little courtyard, above a wholefood shop. It is so cute, I highly recommend it if you're in the area. There is SO much choice, I was very excited. There's plenty of vegan options too. I went for "chorizo" and mushroom ciabatta with crispy onions, and chips, and I also ordered some vegan garlic mayo to go with the chips. Lee went for a vegan hot dog with chips and coleslaw - he really enjoyed it. Mine was amazing, I miss stuff like chorizo now I don't eat meat and this was a very good fake.

After lunch we walked back through the town and went in a couple more charity shops, and then went back through the market, buying crepes on the way. The crepe stall was amazing; I went for dark chocolate sauce, banana, and squirty cream. Lee had dark chocolate sauce and squirty cream. It was so sunny that we sat on a bench in the square eating them, which was lovely!

We drove back past the castle and got back quite early to our caravan. We had already decided to not go swimming, but we went to play in the amusement arcade on site for a bit. Then as it was still early and the weather was nice, we drove along the beach in Morecambe again. We walked on to the sand for a bit and also met a cat! He was very floofy and beautiful and let us get quite close to him, but wouldn't let us touch him.

We went back and just relaxed. Lee made pan haggerty which he always makes on holiday as it's a bit labour intensive so it's nice to have time to do it. It's a traditional north east dish; Lee's mam makes hers with the leftovers of Sunday dinner so it includes meat, but Lee makes his like his grandma did. She was from Northumberland so hers is just potatoes, onions, butter and cheese. It's so nice! We are it with Richmond's meat free bacon which is one of the better vegetarian bacons we've tried. It has a nice smoky taste! I also had some peach Fanta which I'd bought in a shop in Lancaster earlier that day.

I had been working on one cross stitch up to then that week, but I switched over to another. It's a really big one and will take forever, I fear! It's a Zodiac chart and first of all I'm doing all the circles! 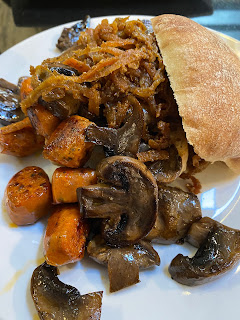 "Chorizo" and mushroom ciabatta, I could eat this again right now! 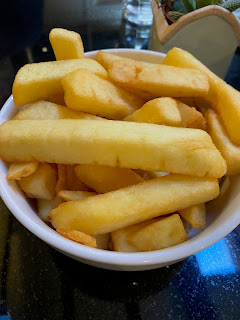 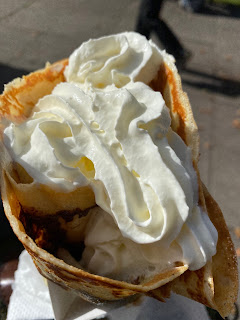 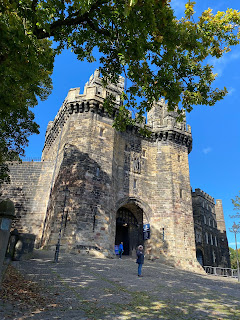 Lancaster castle - we must go back! 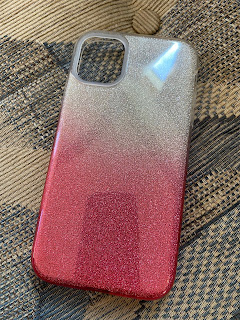 My new phone case, it was only a fiver 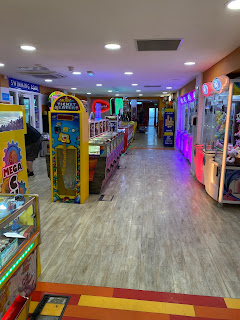 The amusement arcade on site

A panorama of the beach 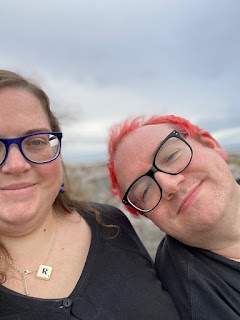 Me and Lee, I'm not sure why only half my face is in the photo 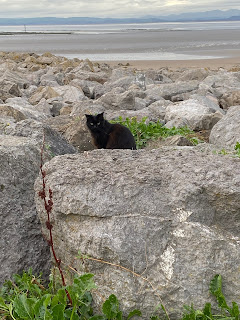 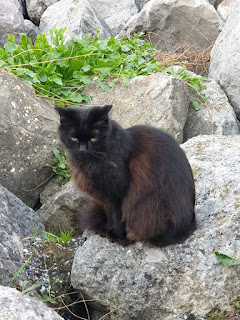 Lee got a better photo of him up close 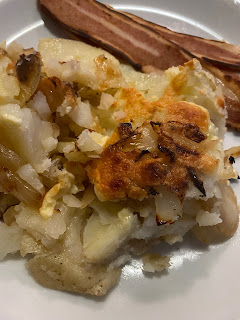 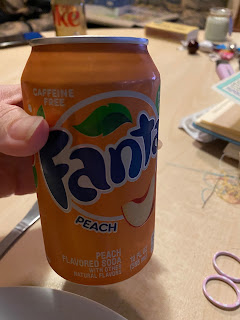 Peach Fanta - it's delicious and I will have to find some again! 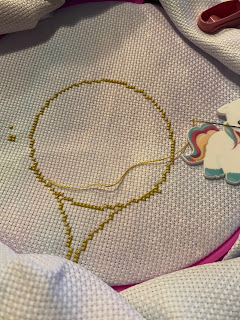 My cross stitch - the needle minder is a unicorn!
Posted by Rebecca at Wednesday, December 22, 2021