As you can imagine, we were tired the day after we went to Blackpool so we laid in and had some breakfast and then set off for Arnside. I read on someone's blog that Arnside and Silverdale are really pretty, so I had said we should go. We packed a lunch and drove up to Arnside, which is tiny but so pretty! We parked on the front and walked down the pier, which was quite busy but full of benches, and sat one right on the front to eat our lunch. There were people fishing and although it was cool it wasn't raining so it was nice to sit for a bit.

Arnside has a few shops so we went in a few of those. We considered an ice cream but it really was a bit cold so we got hot drinks from one shop instead. Then we drove through Silverdale, which was a bit something and nothing - I'm not sure if we missed the main bit. We ended up back in Carnforth, where the Heritage Centre was open, so we went in.

I have never seen Brief Encounter, but I have seen it parodied by Scripps and Posner in The History Boys, which is very funny, so I kind of wanted to see the stuff about it being filmed at Carnforth. There's a lot of information and pictures, and the film was playing in one area with old cinema seats. There is also a ton of info about the area and the station, which I also liked too. The centre is free and I would recommend it. The week after we came back off holiday I watched Brief Encounter and thoroughly enjoyed it!

After that we drove back through Morecambe and stopped on the front. Lee walked down to a record shop but it turned out they were Covid conspiracy theorists with all kinds of nonsense in the window, so he decided to not spend any money there even though they had things he wanted! Such a shame.

We did have a whippy ice cream though, which was lovely and was the last thing I wanted on the holiday! The sun was shining and it was nice out!

We went back to the caravan and went swimming for the last time. The park was starting to get busy again with people, so there were a couple of people in the pool but it was still good to swim in.

Then we went out for something to eat and....... it did not go well. We went to Morecambe Tandoori and waited FIFTY MINUTES for our starters. We asked then how long our mains would be and the waiter snapped, "We're very busy!" Yes, we could see that, but a word of apology would have gone a long way. It really annoyed me, so we walked out. We paid for what we'd had but didn't stay for our main courses. I hate it when peopl don't say sorry! If he'd said "I'm really sorry, we'll get your mains out as soon as possible," I would have probably stayed and waited. But nope.

It did put a bit of a dampener on the end of the holiday, but we got back to the caravan and relaxed and watched something on the TV, so it didn't really matter. We packed most things up before bed, but left some for the following morning. We left at 10 and it's not really too far home to ours. Soon we'd retrieved the kittens and were all at home relaxing!

I wore a dress from Yours and a mint jumper during the day on Friday, you've seen this outfit before as I really like the dress and the combination of the two. In the evening I put on this new Simply Be dress that I got recently. I love the cream and spotty pattern, but the style of dress is a bit out of my comfort zone as I didn't have anything on underneath it except my knickers and bra! But I decided to style it out and wear it anyway, I like how it looks!

We had such a lovely week, full of fun things but relaxing too. 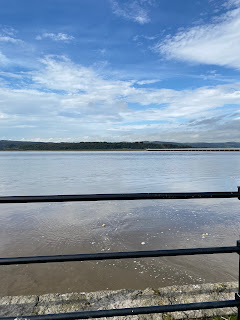 On the pier at Arnside 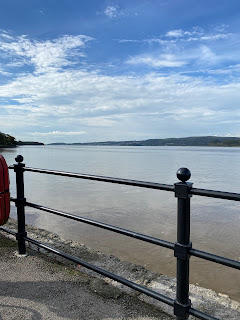 The bay is pretty murky here, it's where the river meets the sea I think 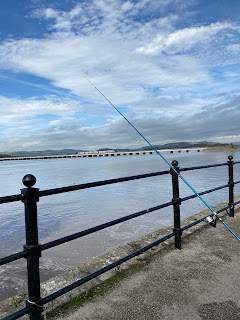 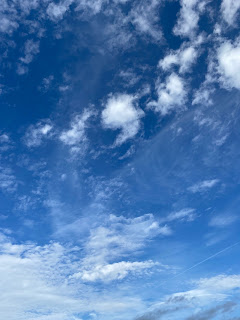 Look at the sky 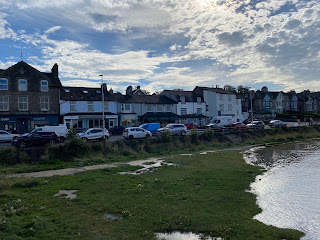 All the shops along the front 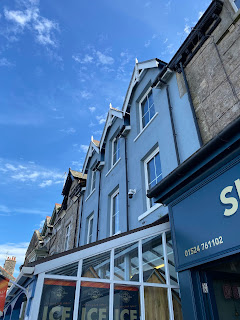 I liked the blue of this shop, too. This is where we bought the hot drinks from 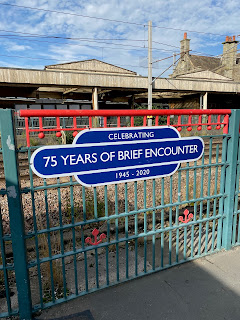 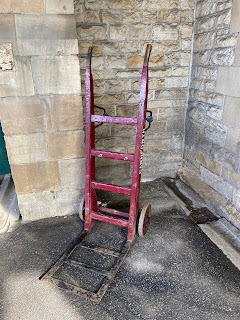 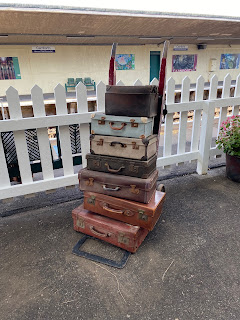 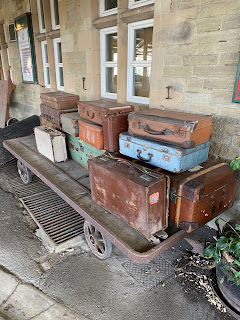 I love old luggage like this, Lee laughed at me 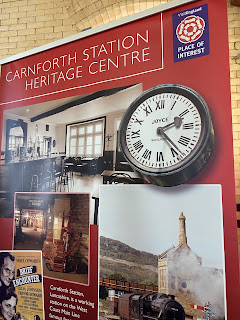 The clock in Brief Encounter wasn't the actual clock, apparently... 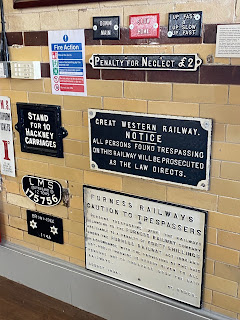 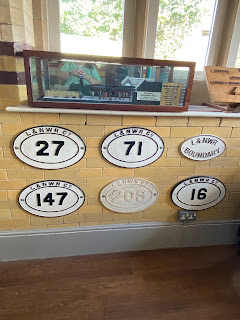 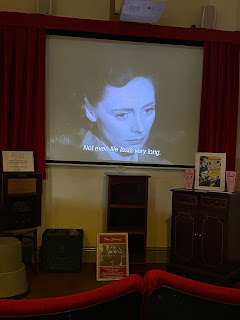 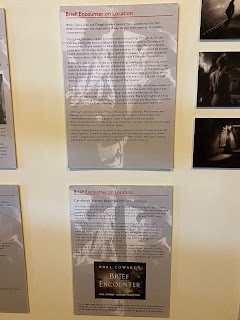 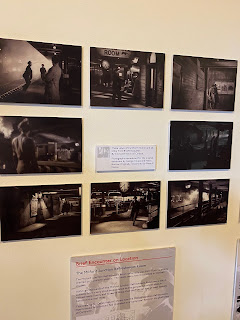 Info about the film 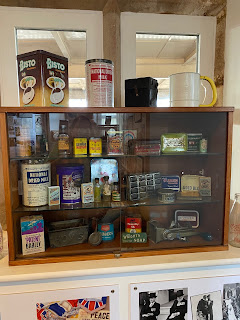 Old packaging, which I also love 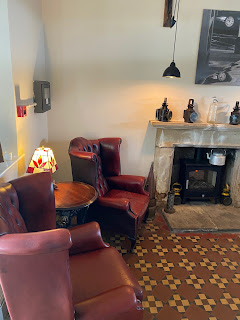 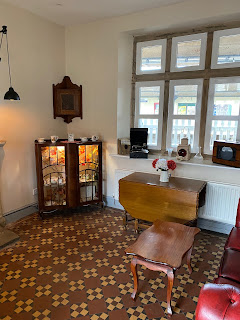 The station master's office, which apparently the cast and crew of the film used to sit in between takes 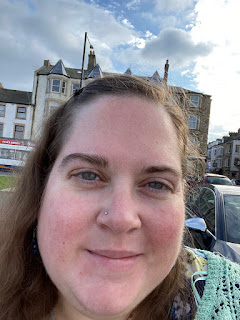 Me sitting on the prom at Morecambe, I had contact lenses in! 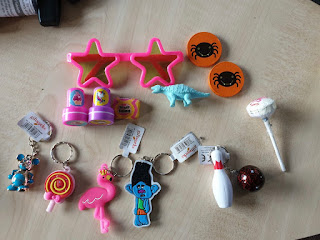 All the stuff we won in 2p machines over the week 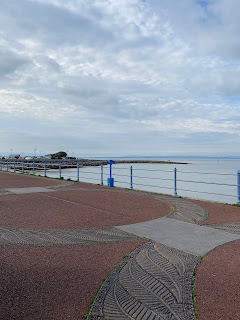 The sea was pretty far in this time, but was turning 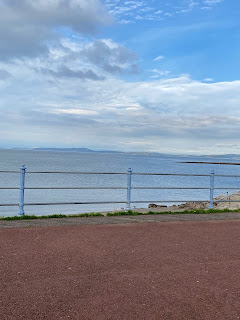 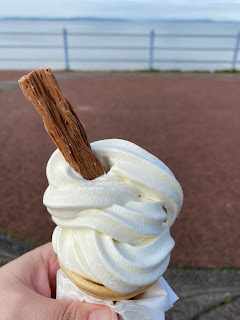 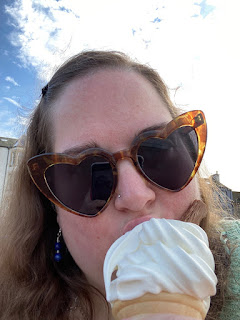 Me and my sunglasses and my ice cream 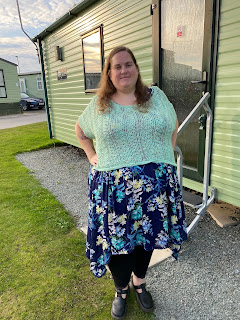 Yours dress and New Look jumper during the day 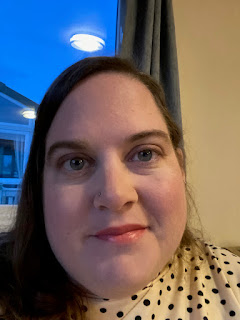 A bit of make up to go out 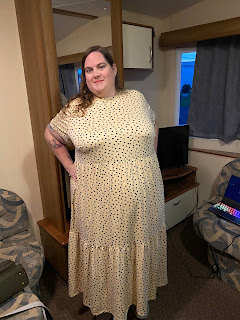 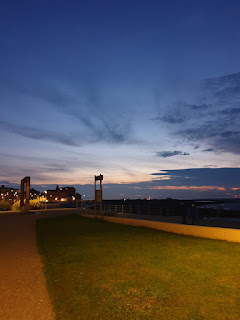 And finally, the setting sun just on the front in Morecambe before we went for food...
Posted by Rebecca at Sunday, December 26, 2021

Email ThisBlogThis!Share to TwitterShare to FacebookShare to Pinterest
Labels: holiday, lancashire, simply be