On the Tuesday of our holiday we decided to go north to the Lake District. We decided on Windermere, and googled and found a cafe in Windermere itself that did veggie breakfast. So we set off around ten and got there around 11. The waiter told us he'd have a table in fifteen minutes so we went in some shops while we waited. It was raining pretty heavily nearly all day so we were a bit damp but we got seated and ordered breakfast. I also ordered a smoothie which was delicious!
We went in a bunch of shops in Windermere and bought some souvenirs and Christmas presents which was good. Then we drove up through Ambleside but it was stupidly busy so we didn't stop. I was surprised how busy it all was actually, considering it was term time. Some of the lake was flooded.
We then drove round through Hawkshead to Hill Top, where Beatrix Potter lived. I thought there was a tea shop there and there is a pop up cafe, but it was only open to prebookings, which we hadn't made. The person there recommended that we go back to Hawkshead cos there's plenty of cafes there, so that's exactly what we did. We randomly chose one and parked nearby, and it turned out to be a vegetarian cafe! I was bummed out that we didn't need lunch, but I had a cheese scone and tomato chutney while Lee went for a slice of vegan chocolate cake which was dark and delicious.
While we were sitting in there, there was a power cut! We were lucky we had already got our food and drinks but other people weren't so lucky. I felt for the staff! They could still make tea and serve cake of course. I would definitely go back - it was called Ginny's - if we were in the area again.
I needed the loo as we left Hawkshead and although there were public loos they were ones you had to pay for, we didn't have the coins needed (too much spending money in the amusement arcades!). But thanks to the power cut the turnstile just turned anyway (I was considering vaulting over it) so I had a free wee and then we set off back.
We went swimming and were told it wasn't a swimming session, which was ridiculous because it was on the sheet of paper that the lifeguard had given us on Sunday... But they let us in anyway, so again we had the pool to ourselves. It was a nice swim. We got showered yet again afterwards (I was very sick of showering, which always leaves me exhausted although this wasn't too bad as showers go) and then we had baked gnocchi for tea.
Oh and I was wearing my Clash t-shirt with a skirt that used to be a dress - a simple but comfortable outfit and one which kept me warm in the rain. 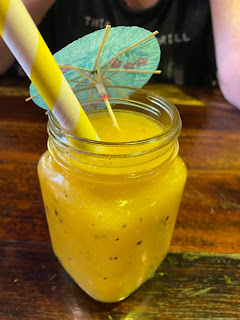 Delicious smoothie in the Magic Roundabout cafe. The staff were a little weird but the food and drinks were lovely, and it wasn't expensive 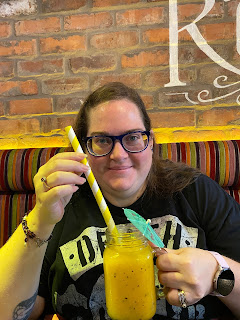 Lee insisted on taking this photo for the blog 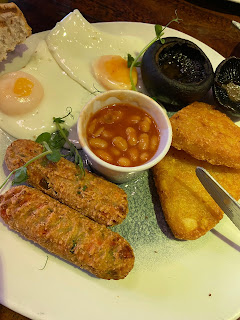 Veggie breakfast - the 'sausages' were like potato croquettes with peas and carrots in, but they were nice and we both enjoyed them 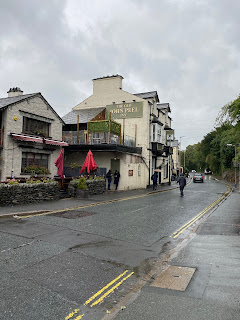 A very wet and windy Windermere 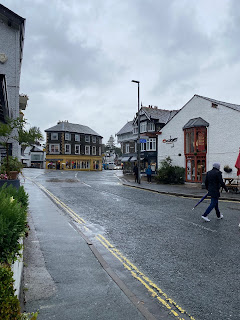 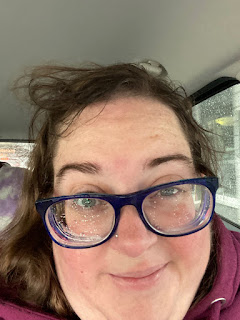 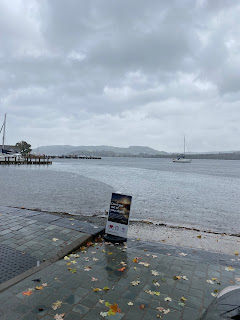 Here was where it was flooded, in Bowness I think 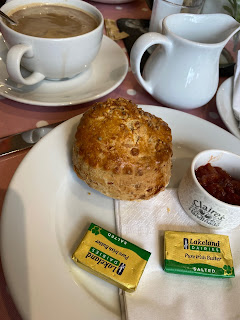 Cheese scone in the vegetarian cafe in Hawkshead 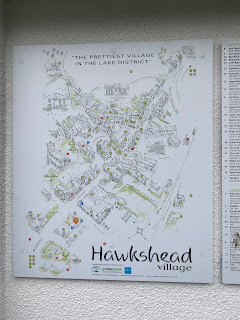 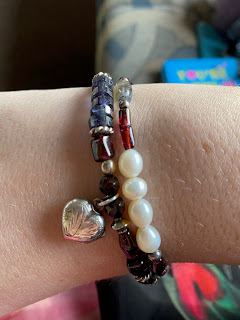 This bracelet is one of my faves - my friend Jacqui bought it for me a few years ago. It's garnet (my birthstone) and fluorite and pearls, with this very cute silver locket on it. I wear it a lot 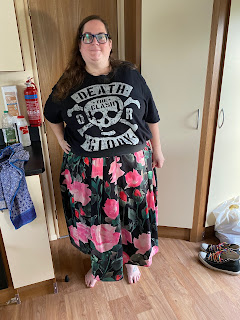 My outfit, I'm standing in front of the door between the living area and bedrooms/bathrooms here, which we found to be a useful door 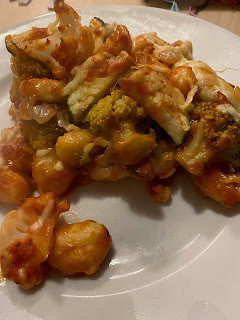 Baked gnochhi for tea with courgette, broccoli, and cauliflower and a Dolmio sauce, with cheese on top. Simple but delicious and perfect for autumn!
Posted by Rebecca at Monday, December 20, 2021