We Will Rock You at Leeds Grand Theatre 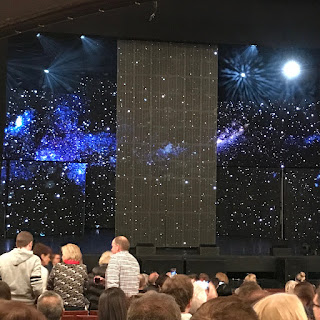 In November Sam and I went to Leeds Grand to see We Will Rock You. I had seen it advertised when we saw Kinky Boots there back in April, and wanted to see it. I love Queen and I had heard good reviews of the show, so I asked Sam if she also wanted to go. She said yes and she got the tickets since I bought some ones for another show a bit later.

She was already in Leeds when I arrived so we went in and sat in the bar for a bit. We had seats in row R of the stalls, which is shorter than the rows in front of it meaning that even at the end of it, you're pretty central and have a good view of the stage. 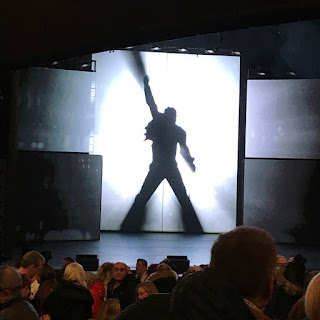 The show was really good fun. It's very kitsch and camp and tongue in cheek, which are all things I love. It's very funny, the costumes and choreography were excellent too. Plus all the singers were really good, really talented. The story is a bit of a nod to Flash Gordon and a bit of a nod to the Rocky Horror Show. It's just really fun, so I really enjoyed it and laughed a lot. I would see it again in a few years or something.

I also want to say that Leeds Grand is one of the better theatres I've been in for seating. Often theatre seats are old, and small, and can be uncomfortable for me to sit in. I manage, but I often end up in even more pain that usual. But I think they redid the ones at the Grand, and they're much better. They have a lot of leg room, and they're quite wide too. I was sitting next to another plus size person, and we were both fine and didn't really argue over the armrest either. So I would recommend it from that point of view!
Posted by Rebecca at Wednesday, January 01, 2020